This summer I went camping in the The Thumb of Michigan, and yes, I did hold up my hand and point to the spot on my own thumb when telling people about it. 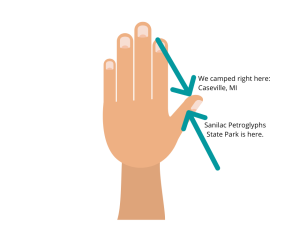 The Thumb was beautiful and, unlike at west-side campgrounds, we could get a great spot only a month before we wanted to head out. I think we’re going to make it an annual thing.

But it also meant that we were only 30 minutes away from a place I’d wanted to visit since I learned about it in 2019: Sanilac Petroglyphs Historic State Park. This park is dedicated to educating visitors about and maintaining the stone carvings that were made by Native American people there between 1,500 and 300 years ago. The carvings are called Ezhibiigaadek Asin, “written on stone,” in the Anishinaabemowin language. 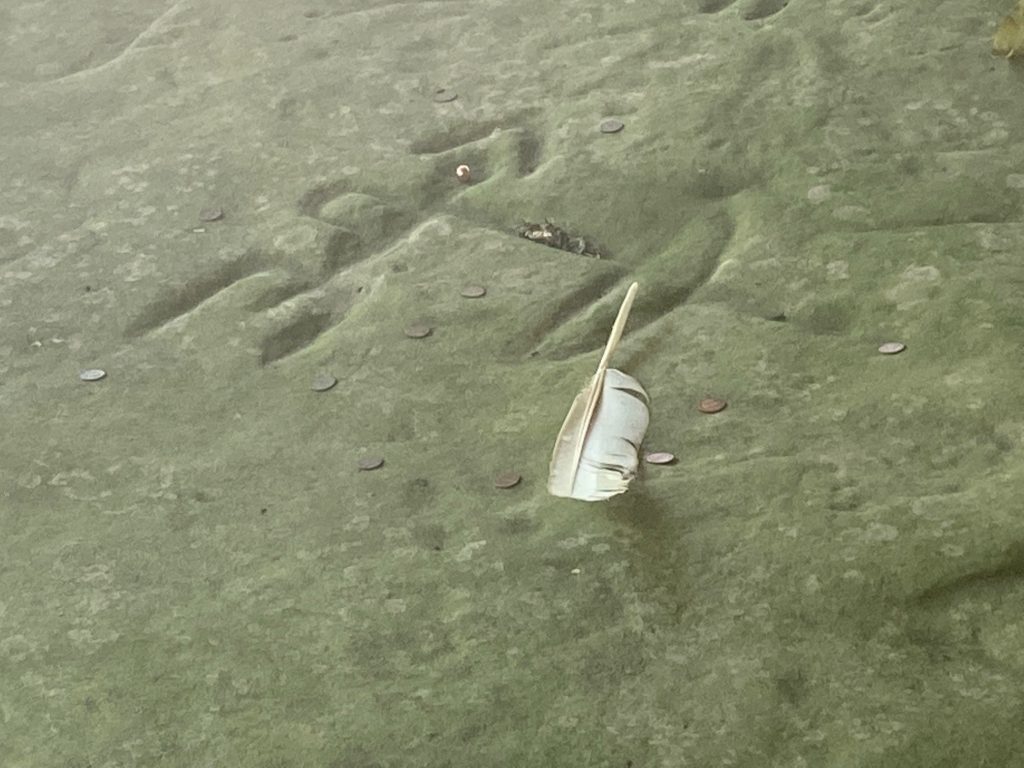 So much history is told from such a small location. From how the petroglyphs were discovered: two fires devastated The Thumb in 1871 and 1881 and cleared the brush so people could see this rock again (the 1881 fire burned so hot and moved so fast that the technology didn’t exist that would allow people to outrun it so whole families jumped in their well to try to save themselves). To how Native American tribes used that land both to sustain their lives and to commemorate and  pass along their history and worldview.

The Anishinaabe (original people) used this Marshall sandstone outcropping by the Cass River as an important gathering place, a place to talk about who they were, where they came from, where they were going, and what their values were. An elder would gather the people, take a stick in hand, and deliver a teaching while tracing the figure being spoken of in the sacred rock. With each repetition, the figure was carved deeper into the sandstone.

The above figure is the archer, who shoots knowledge into the future for coming generations. The items around it are offerings of tobacco, copper, and feathers that contemporary Native American people have given in gratitude for these gifts their ancestors made for them. 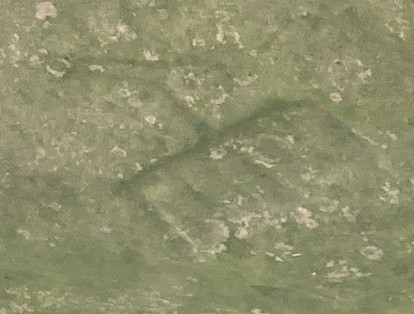 If I remember correctly, this is the thunderbird with wings outstretched, creating thunder with each flap. 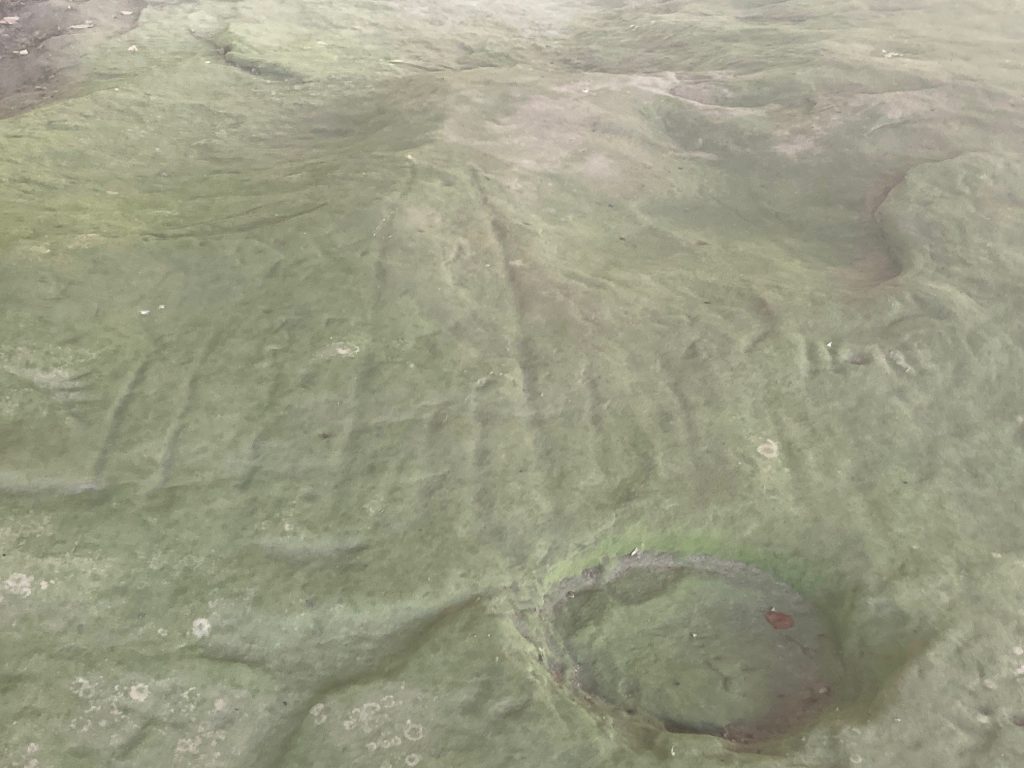 This figure has been subject to more erosion than others, so it’s no longer as clear. At the bottom right corner of this photo you see a round hole in the rock–vandalism. At some point, someone dug a figure out of the sandstone and removed it. Which is why there’s now a high locked fence surrounding the site.

There were stories the interpreter couldn’t tell us because we were a group of men and women, and some teachings were only for men and others only for women. 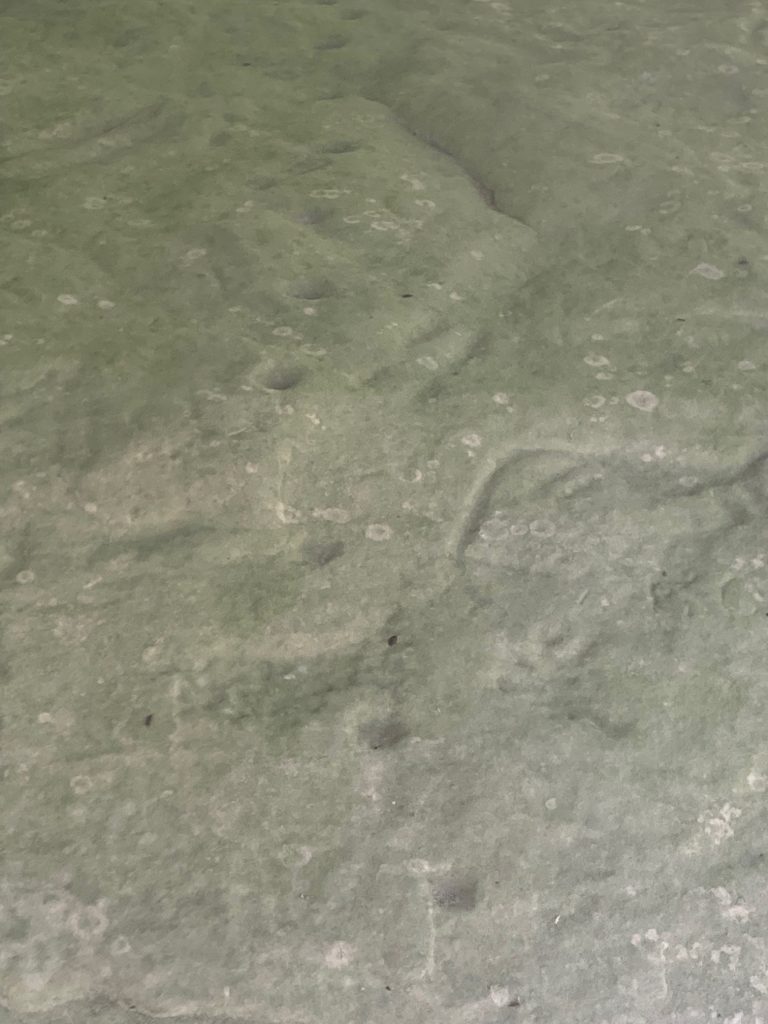 This line of circular indents was a mystery until someone used a compass and realized it was a perfect north-south line.

I felt so connected to those long-ago storytellers. For hundreds of Sunday mornings, I have knelt or sat in front of a group of children and talked about how God loves us with a never-ending, always-and-forever love; that God always wants to hear from us; that God is involved with our lives in mundane and amazing ways; that the life of faith is one of both comfort and challenge.
While I tell the stories, I move my hands over sand, manipulating wood and clay and felt figures as I tell a rotating group of 80ish stories. Over and over and over for the last 24 years. Carving them deeper into my own heart and life, while hoping to plant seeds in the children’s hearts and lives.

I can say the beginnings of many stories from memory:

The desert is a strange and wild place. During the day, it is burning hot. But at night it is freezing cold. The wind comes, and as it blows, it shapes and molds. The desert is never the same. So many important things happened in the desert that we have to have a small piece of it in our room.

Once there was a man who said such wonderful things and did such amazing things, that people began to follow him.

This is the season of Advent, the time we are all on the way to Bethlehem. But who will show us the way?

These have been the way people have done faith formation forever. This trip was a beautiful reminder of that.