Picture book for adoptive and foster families
(in collaboration with Amanda Barton and Joel Schoon-Tanis):

This book takes us through the experience of a young boy who feels something monstrous growing inside him (like a cobra, a T Rex, a gas bubble), growing until it comes slithering, roaring, exploding out: “You’re not my real mother!” His mother reassures him that she is his mother in truth, and a warm glow spreads inside the boy. But the feeling doesn’t last. The monster is soon lurking again. The story ends on an “okay for now” moment of love and silliness. 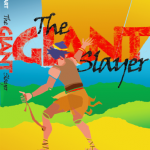 Nobody expects to grow up with a hero. To his family, David was talented and honorable, yes, but also a show-off, a seeker of the limelight. It certainly didn’t help when the prophet Samuel anointed David instead of his brothers. His father, Jesse, saw his job as getting David to fit in. After all, he was a youngest son who’d never have a household of his own.

But David did not, could not fit in. At 13, his musical gifts brought him into the service of the king. At 16, he took down the giant with a sling and a stone. When the king set him up to fail and gave him an army unit to command, he turned them into a unit that fought with one mind.

If Jesse couldn’t recognize the greatness in his son, Saul didn’t have that problem. He knew David was a threat to his kingship. When Saul forces David’s hand (by one too many attempts to kill him), David runs to the one person who can answer the question that has been burning inside him since he was 12. What Samuel tells him is both too wonderful and too terrifying.

Saul had been right all along. God meant for David to be king.

The Giant Slayer is a young adult novel that imaginatively retells and expands the biblical story of David and Saul from the anointing through the middle-of-the-night escape out the window to David’s acceptance of God’s plan for him to be king. It places the reader in the world of 1,000 BCE, to “show” what the Bible “tells.” David is the original Harry Potter and Percy Jackson, so The Giant Slayer seeks to retell this old story in a way that will sound familiar to those who grew up loving these contemporary heroes.

The Reluctant Rebel or The Something Mercenary (clearly tentative titles)

This book will take David through his ten (or so) years on the run from King Saul: his close escapes from and his refusal to kill Saul; the gradual gathering of his rebel group of 600; his time as a mercenary for the king of Gath. We will see Saul’s attempt to remain healed of his paranoia, but then watch as he descends even further and commits horrific acts of violence. The story ends when Saul has been killed and David declared king – but only of Judah.

This book will explore how David becomes king of the united kingdom of Israel and Judah, the establishment of Jerusalem as a political and religious center, and all the thorny issues that confront David once he’s king (including Bathsheba, of course). Since Saul is dead, David’s foil in this book will be his nephew Joab, the leader of his tribal army, who doesn’t recognize that David is attempting to usher in a new era.

If you are interested in finding out when any of these books are released, please let me know.