The books are ALL IN!!

but the books are finally here, piled up in my dining room and in Amanda’s living room. 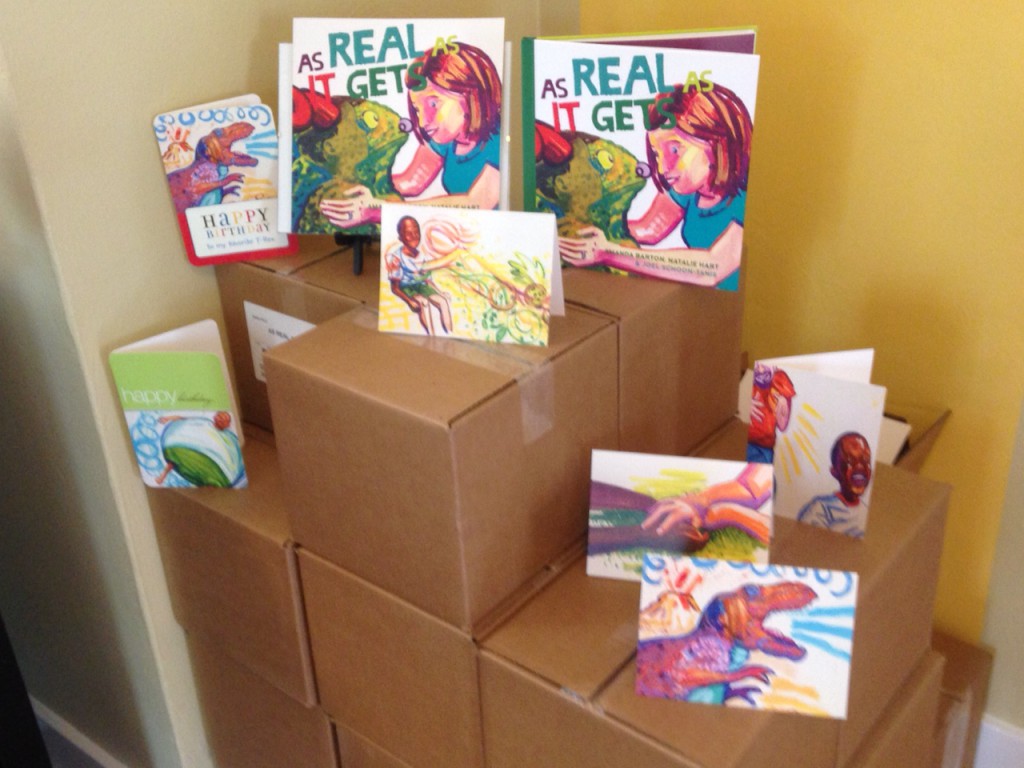 The hardcovers came in yesterday (finally!), so now we’ve got all the books. I am totally biased, but they are gorgeous. The paper is nice and thick, the covers so nice and soft that I keep wanting to pet them, the colors so vibrant. (I’d be remiss if I didn’t mention that you can order them here, on sale for $12 and $17 for the release month.)

“But wait,” you may be saying, “what are those things that look like greeting cards?”

Well, they’re greeting cards 🙂 If you’re in the Zeeland, Michigan area this Saturday, May 21, come and see me and Amanda at the Peddler’s Market, where we’ll be selling the books as well as some cards. We’ll be putting the cards for sale on westolivepress.com after the weekend ($4 each) — three birthday cards, one Father’s Day card (the one of the dad making silly T Rex arms), and three cards with general statements that could be used for birthdays, Happy Adoption Days, and any day “You are so loved” and “We’re in this together” would be appropriate.

There are what seems like a thousand things to do: get the Kickstarter hardcovers signed by all three of us, send them to our contributors, send the orders that are coming in through the website, make price tags for the Peddler’s Market, get us set up on Fulfillment by Amazon so the books will be for sale there (soon!), get set up on Goodreads, get onto the SEO wagon for the website, make sure my Square reader works, put the cards on the website….

The list also includes fun things. I got to upgrade my membership in the Alliance of Independent Authors from Associate to Author (see the shiny new badge in the sidebar).

And we got our first feedback from a reader:

I received the book today and read it to my son at bedtime. He made me read it three times and the last time  he wanted to read the boy’s part and have me do the mom. He’s in first grade so it was a lot for him to read but he was adamant! He really liked that the boy looked like him and I actually do happen to look like the mom. Thank you so much! He said his monster looks more like a dragon and had a lot to say about his monster. I’ll try to get him to draw a picture for you.  Great book!

It’s so easy for me to get caught up in the to-do list, in the thrill of finally living my dream of being a published author, but that letter grounds me: this project is for those kids, for those families. And it’s a privilege to play a role.
February 23, 2016February 23, 2016 ~ Natalie Hart ~ Leave a comment

My new best friend is command + shift + 4. Because that’s how you take a screen shot on a Mac while choosing exactly what image you want to steal … um, I mean share.

Back in October, I posted a lot about a Kickstarter project for a picture book about a boy who can’t help yelling, “You’re not my real mother!” We made the goal (hooray!) and the always-brilliant Joel Schoon-Tanis has finished the illustrations, so now the project is on to the photographer and the book designer. It’s getting closer!

As a writer, it’s unusual for me to be at a loss for words, but that’s where I’m at every time I look at these illustrations. My co-author, Amanda Barton, and I pounded out the story and shaped my words, and now here they are, given bodies. It’s moving.

So as a treat for us all, here are a few of the illustrations I screen-shotted from Joel’s Instagram feed. To see more of them, as well as other great paintings and images, follow him: https://www.instagram.com/joel.schoon.tanis.art/

If you weren’t part of the Kickstarter and you’d like to find out when the book is available, head over to West Olive Press and sign up.

Boys and girls, this will be my last Kickstarter-related post.

[I pause here to give you a moment to say, “Thank goodness.”]

In three days, the campaign will be over. We’re getting closer: less than $10,000 to go. And there are a few big contributions that I’ve been told to expect that haven’t come in yet. Still, hope and anxiety are battling it out inside me, swooping in and out of prominence like a murmuration of starlings.

Frankly, that was so mesmerizing, I’m already a little calmer. Mesmerizing murmuration. That’s fun to say. Go ahead, take a moment to say it out loud.

But the reality of all that swooping in my emotional life isn’t nearly so beautiful. I will be relieved when, in three days, we know the status of this project. When we know whether we’re moving full steam ahead, or scrambling to rethink everything.

It’s been a privilege to hear so many of our supporters tell us their adoption and fostering stories. It’s been moving to feel the support of so many people. Still, I will do everything in my power to never do another crowdfunding campaign ever again. I know it’s a good business model for testing market support and building buzz, but I am not well-suited to the emotional roller-coaster.

So one final plea. One final link. I’d be a bad entrepreneur if I didn’t. Here’s the video, and here’s the link.

But my father is. Which may be why I am not one. Or, rather, why I never wanted to be one.

Do you know how long and how hard entrepreneurs work? My dad was still pulling all-nighters well into his fifties.

Do you know how much entrepreneurs carry on their shoulders? For a year after high school, I worked for my dad’s fledgling company, and since I was daughter, as well as employee, I knew those times he was one day away from not making payroll. He always worked it out and found backers, but that’s a lot of stress for one person who’s simultaneously building a product, managing the people making and selling the product, finding new markets, taking care of current customers, pushing innovation, coming up with new ideas so there will be more products in the future, traveling to spread the word, wondering whether they’re making money fast enough to keep the investors happy, making sure that the deals made are solid enough for both the near and the far future, all while doing things like spending time with family and friends (who add their own stresses, as well as joys). Entrepreneurs are superheroes. Seriously.

Their ability to maintain hope and determination in the face of rejection and long odds is amazing.

But, alas. I am too much like my father: I have ideas that inspire and delight and confound me, and in pursuing them, I’ve become a writer who is independently publishing her work.

In other words: I’ve become an entrepreneur.

This year, I’ve started two companies and brought two writing projects to ever-nearing fruition. I’ve got this Kickstarter thing happening for As Real As It Gets (a picture book about an adopted or foster child who yells, “You’re not my real mother!”) (less than two weeks to see whether we’ll make it!), which is a constant dance of pitching, rejection, acceptance, and learning. So, so much learning. And the thing about mistakes is that you can only see them after you’ve made a decision and acted on it, not before. I am constantly anxious, yet still a little hopeful. Committed to moving forward, mistakes and all.

If every person who told us they think the book is amazing and asked us to let them know when it’s published (not to mention the organizations that do the same), contributed to the crowd funding campaign, we’d be set. But they don’t. Is it because you have to be a little entrepreneurial to contribute to a Kickstarter campaign? I don’t know, but we’re working as hard as we can to get the word out to anyone who might be just that little bit of entrepreneurial. Or to any adoptive or foster parents who might be just a little bit desperate for books that address their kids’ experiences.

Speaking of which, Amanda and I will be interviewed by Grand Rapids community powerhouse Shelley Irwin on the WGVU Morning Show on Friday (I’ll post a link once it’s on the web).

And pray for me. I’m not a natural entrepreneur and I hate asking people to do things for me … but I’m learning.