So we’ve reached the last day of January, the month I’ve given myself to take care of as many nagging jobs and deferred decisions in my house as I could. I started the month with a list of 52 items. As of this morning, only 18 remain undone.  And at least 8 of those will be taken care of by the end of today.

For me, that’s nothing short of miraculous.

I actually did what I set out to do. I didn’t give up halfway through. I’ve written before about how emotional all this getting rid of stuff has been, but there has been another emotional aspect. Any time I go through a process of fixing up the house, I think of my friend Natasha, who loved fussing with her house. This was more intense than usual this month, because she was very ill, and then dying, and then she died.

She once described the process of purging her attic as, “Feng-ing it up and shui-ing it out.” Feng shui (pronounced fung shway), in case you don’t know, is the ancient Chinese art of managing the flow of energy in a space (home, office, wherever), a major tenet of which is getting rid of clutter. It is not normally used as a verb, neither is it generally spoken of so flippantly, which made it memorable, even for my husband, who is not as allergic to feng-ing things up and shui-ing them out as some other husbands I know, but he doesn’t delight in it like I do. Even so, the phrase has a permanent spot in our family vocabulary.

There’s a flipside to all this weepiness over getting rid of things and reveals the best purpose behind clearing the clutter: Which emotional items to keep? Which objects can now shine?

I’ve gotten rid of some of my kids’ baby clothes, but I’m still keeping others. I discovered that I’ve kept fewer of my son’s baby things than my daughter’s, which makes me feel like a bad mommy. In my defense, he did have baby boy cousins who I passed a lot of clothes down to, and the quilt I made him became damaged, so I threw it away in my last giant purge session. But I do have the little grey and red sweater and booties my cousin Esther (who died several years ago) knitted for him, so that counts extra. And I have vowed to store what I decided to keep properly so nothing else will get irreparably damaged.

I took photos of all my kids’ school projects — the giant tri-folds, the dioramas, etc. — but said good-bye to the originals.

I framed a few beloved T-shirts, just for fun. 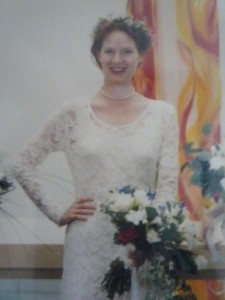 Then came the big one: wedding paraphernalia. I still had everything except my borrowed item, a beautiful pearl necklace that went back to my mother-in-law. My headpiece and bouquet rested in a lovely basket … shoved in a far corner of a shelf in the storage room. They were dry. Dry. I tried hard not to even sneeze near them in case they’d fall apart. They were still lovely — my friend Rose did a great job with them 18 years ago (see the original to the left).But it was time to say good-bye.

So I put on my wedding dress and had one last photo session. 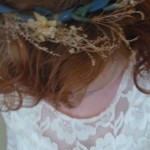 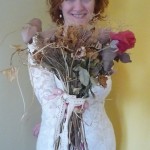 You may have noticed that not everything in the bouquet has faded with time. There was a red fabric rose in there. I’ve had it since I was sixteen, when my father gave it to me along with this poem (reprinted with permission, also note that Vader is Dutch for father, not a Star Wars reference, and I am my father’s only daughter):

I know you did not know it,
But your Dad can be a poet;
All it takes
Is someone who makes
My heart rejoice
At the sound of a voice
With such joie de vivre.

Roses are red,
Violets are blue,
I love you true;
And until there is a Fred,
This could be the last chance when I may
As a Vader
On this sweet sixteenth birthday
Give the single red rose
to the girl I chose
to be my favourite daughter.

And as you’ll notice
Unlike some roses
Which fade,
This rose is made
to be a lasting reminder,
though lovers may be fickle
And make you feel like a pickle,
You will always be
Your Vader’s
Favourite daughter.

I’m keeping the red rose. And the poem. Nothing could persuade me to part with them. They’re why the fenging up and shui-ing out is good: now the important stuff can shine.

What sentimental items repeatedly survive in your house?