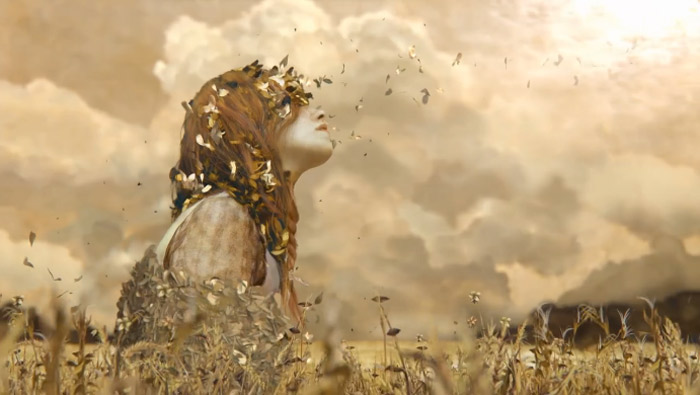 It’s the dream of many a historical fiction writer to send their readers back to the source material, and that’s what the series known in the States as Anne with an E (out on 5/12 on Netflix) did for me: it sent me right to the original Anne of Green Gables* to dig out the hints and suggestions that the TV writers ran with.

You see, my friend Lorilee Craker, author of the moving and marvellous Anne of Green Gables, My Daughter, and Me, has friends nearby with access to Canadian television and sent me into raptures (to put it in an Anne-like way) when she invited me to watch the new Anne series with her as they aired on the CBC. So I’ve seen them all. And I have some reactions.

My first reaction was pure love. 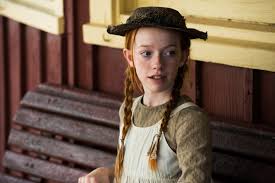 This CBC version was created by Moira Walley-Beckett, who was a writer and producer on Breaking Bad, so it isn’t surprising that her Anne is darker than the one we were used to seeing in the 1985 miniseries, and who we may have seen in high school musicals. This Anne has flashbacks about life as an overworked child taking care of children in poor households with drunken husbands creating havoc. This version of Anne is definitely informed by our contemporary understanding of what it means for a child to live for 11 years being unwanted, unloved, treated like a servant, and probably physically abused–but it is at the same time the true Anne.

Great historical fiction sucks us into the story so intensely that we forget we already know how the story ends, and that’s what Anne With an E does. I forgot that things work out for Anne and she soon will get all the love she’d ever missed from Matthew and that Marilla would soften and grow because of her and she’d have wonderful friends and a town that embraced her. I couldn’t take my eyes off the skinny intense little girl with the big eyes that showed the entire stormy spectrum of her emotions.

When I went back to L.M. Montgomery’s work, I saw that all the pain and isolation the new series highlights was in the source. In the book, it’s easy to skim over the reality of Anne’s life before Green Gables because the painful information comes in an avalanche of Anne’s words about a dozen different things in one speech. But the new series pauses and lets us see the effects of her life on her, and it’s so good and right. Our Anne is a survivor of a traumatic childhood. She gets flashbacks. She disassociates from her reality through her agile imagination. She doesn’t understand the expectations of regular society because she’s never been part of it.

Here are some quotes from the book that could not be plainer about the darkness Anne lived with, and I’m going to present them without the chatter about the Lake of Shining Waters and kindred spirits so we are not distracted by her charm.

Oh, it seems so wonderful that I’m going to live with you and belong to you. I’ve never belonged to anybody–not really. (p.12)

And upstairs in the east gable, a lonely, heart-hungry, friendless child cried herself to sleep. (p.29)

[On the 2nd place she lived, at age 8, taking care of 8 children] “It was a very lonesome place. I’m sure I could never have lived there if I hadn’t had an imagination.” (p.40)

[When Marilla asks whether the women were good to her] “O-o-o-h,” faltered Anne. Her sensitive little face flushed scarlet and embarrassment set on her brown. “Oh, they meant to be–I know they meant to be just as good and kind as possible. And when people mean to be good to you, you don’t mind very much when they’re not quite–always. They had a good deal to worry them, you know. It’s very trying to have a drunken husband, you see; and it must be very trying to have twins three times in succession, don’t you think?” (p.41)

Pity was suddenly stirring in her heart for the child. What a starved, unloved life she had had–a life of drudgery and poverty and neglect; for Marilla was shrewd enough to read between the lines of Anne’s history and divine the truth. (p.41)

It feels like that’s what Walley-Beckett, and AmyBeth McNulty, who inhabits Anne, have done: read between the lines of Anne’s history and divined the truth.

Like in real life, the truth often makes us uncomfortable.

On the trip from the train station to Green Gables, Anne tells Matthew, “Do you know, my arm must be black and blue from the elbow up, for I’ve pinched myself so many times today. Every little while a horrible sickening feeling would come over me and I’d be so afraid it was all a dream, then I’d pinch myself to see it if was real” (p.21). She presents as a charming anecdote, but the CBC series shows us the pinching and the giant deep bruise it causes–and it looks like what we now call self-harm.

In one episode, Anne has intense conversations with herself in her reflection that felt odd and disquieting to me as I watched, but then I went back to the book and there it is, from the first place she lived:

I used to pretend that my reflection in it was another little girl who lived in it. I called her Katie Maurice, and we were very intimate. I used to talk to her by the hour, especially on Sundays, and tell her everything. Katie was the comfort and consolation of my life. (p.58)

The comfort and consolation of her life was a wavy reflection in a bookcase with only one pane of glass because the other had been smashed by a drunken husband; this felt more like a dissociation response than a developmentally appropriate imaginary friend.

There is a scene in the CBC series that doesn’t appear in the book, and it got a lot of press and outrage in Canada, and it probably will here, too. Anne is at school, and is gossiping with the girls about the romantic feelings their teacher has for one of the students (this was also openly discussed by the girls in the book). She winds up spinning this tale about a mouse in the male teacher’s pocket that she knows all about from the place she lived in where they had 8 kids. The girls eventually figure out that mouse refers to his penis and to sex and they go from being impressed to horrified. As does Avonlea.

While this doesn’t appear in the book, it is entirely consistent with it. Anne is constantly saying things she doesn’t know are considered wicked. She tell us this from the beginning:

[About the asylum] “It’s worse than anything you could imagine. Mrs. Spencer said it was wicked of me to talk like that, but I didn’t mean to be wicked. It’s so easy to be wicked without knowing it.” (p.12)

And Marilla admits more than once that she has to make allowances for Anne because she’d never been properly taught. So it is entirely plausible that Anne would talk openly about things that were normal for her life experience, but were not the sort of thing nice girls talked about. This scene also gives us a satisfying mama-bear moment and speech from Marilla, so that takes some of the off-book sting out of it.

Because the off-book portions sting. They are substantial, with three or four episodes being mostly pure invention.

Yes, I know it’s funny to be complaining about the creators inventing things about a character who is a pure invention, but Anne is such an icon, such a well-known and loved fixture, that this treatment feels like historical fiction, or even speculative fiction. It feels like the show is playing with reality and experimenting with facts, even though both the original reality and facts are, themselves, fictional.

Many of those off-book portions had character revealing moments that were gorgeous, and worth my vague discomfort. Others puzzled me, although I could see what the show was going for. But there were also moments when the series got the characters wrong, and had them do things that were so out of line for who I know they are that I got upset. I might even have gotten a little rage-y. Even so, I couldn’t stop watching and feeling all the feels, much like Anne does.

All the actors are stellar, with the new family of McNulty’s Anne, R.H. Thomson’s Matthew, and Geraldine James’s Marilla being absolute stand-outs. Each of these actors is able to deeply move me with just their faces, without dialogue. The new Gilbert, Lucas Jade Zumann, is adorable and honorable (although not as playful as the book version) and I would have found him dreamy back when I was a girl. 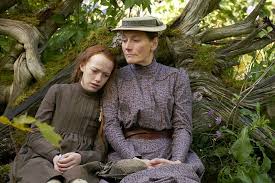 I haven’t re-read Anne since I became a mother, and I was astonished to see how much the book is the story of Marilla adjusting to parenthood and coming to love Anne, and to laugh–and that’s something Anne With an E highlights really well. The new series is very much the story of this emerging family, and how keeping Anne changes Matthew and Marilla. We also get to see snippets of how they may have wound up unmarried siblings: they have pasts in this series, pasts that affect their present. Just like Anne.

My love of the series is not as pure as it was after the first show, but it’s still there. The show a polarizing experience, but, I believe, worth it. Please watch it so I have more people to talk about it with. Because there must be talking!