So my family and I took a one-day trip to Chicago. After the marathon drive to NYC earlier this year, a 2 1/2 hour drive was nothing. We hit the Museum of Science and Industry for the Mythbusters exhibit, which was incredible. You know how exhibits always say they’re hands-on, and then you get there and there are some buttons to push and cranks to turn and that’s it? Mythbusters is not that exhibit.

We got to do all kinds of versions of some of their episodes.

Do you get wetter running or walking through rain? Our verdict: walking. But if you wear a thick, absorbent sweatshirt, then it won’t look like you got wet at all.

Can you build a house that will withstand a wind storm? Our verdict: mostly. Our best structures had the roof or a wall or two go, but most of it stayed intact.

How long can you hang from a ledge on a cliff? I would drop within fifteen seconds, the kids made it about 45, and my husband around 35.

Can you drive blind? I don’t know the answer to that, but I can tell you that I coach people into quickly crashing.

Can you whip a tablecloth off a loaded table without making the plastic dishes fly? Yes. If you don’t count a couple of cups that went on their side.

We had a near religious experience at Sprinkles Cupcakes. Many of you may know that this is, apparently, where the cupcake craze started. I thought that was at Magnolia Bakery in NYC, but I guess I was wrong — unless there’s an East Coast vs. Midwest cupcake rivalry I’m unaware of.

We were walking on the way to my husband’s pilgrimage to Urban Outfitters and saw a line of people snaking out of a storefront on a chilly, rainy day. So, this being a vacation day, we followed our whimsy and checked it out. And then had the best cupcakes we’d ever had. I love your almond cupcake, Little Pearl Cupcakes, but the lemon one I had at Sprinkles was so light and deeply flavorful. It was on a whole ‘nother level. The kids got S’more ones with graham cracker crumbs at the bottom of a chocolate cake and a dome of toasted marshmallow on top. Oh, and I forgot about the core of soft chocolate in the middle. My husband got one with chocolate cake and vanilla frosting.

Everything was perfection: it was exactly what it should be in that ideal world I normally don’t live in. But I did for a few minutes yesterday, and then a few more today when I finished my cupcake. And I was grateful. 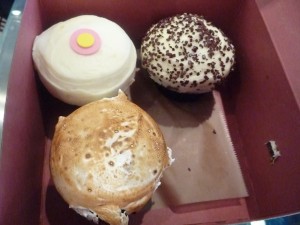