A couple of months ago, the family and I took a trip to Chicago, to the Museum of Science and Industry for the fantastic MythBusters exhibit. While there, we played Mindball. In this game, two opponents wearing 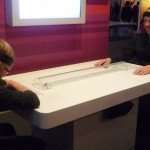 headbands sit opposite each other. Sensors in the headbands detect each person’s brainwaves, and the most relaxed person moves a little ball towards the less relaxed person. As the MSI says, “Compete to Relax … Relax to Compete.”

This is how NOW Magazine describes it:

Mindball is “an experience product.” Players use their alpha and theta brainwaves (two of four major brainwave types) to control the rubber-coated steel ball and move it across the 4-foot-long game table. Each player wears a headband equipped with electrodes that act as biosensors to measure their brain’s electrical activity as recorded from the scalp – similar to how a neurophysiologic electroencephalogram(EEG) machine is used to assess brain damage and epilepsy.

The person with the stronger alpha and theta brainwaves will be able to “push” a magnetic carriage under the table (visible to players and audience as a ball on the surface) into their opponent’s goal and score a point.

On the face of it, this isn’t a game I should win, especially against my husband. One of the major ways we complement each other is that his steadiness and general relaxedness balances out my excitability and general high-strungedness. If you were to try to give him a neck/shoulder massage, you’d find the area pliable; he never needs a massage. I’m always in need of one; the area between my neck and shoulders is constantly tense.

Yet I beat him in the game of relaxing. This was even more odd because I was not relaxed. My heart was pounding and there was a small crowd around us, watching, so I also felt like I was performing. I love to perform, but it makes me tense and nervous, especially when I could hear them comment on our competition.

So how did I win?

Alpha brainwaves are strongest when a person is relaxing, when the brain is neither actively working through something nor engaged in an activity that requires thought. Meditation or yoga often brings on alpha waves. Theta waves are slower than alpha, and can occur when a person is daydreaming, or when engaged in an automatic and repetitive activity, such as driving on the freeway (all those times you can’t remember the last few miles) or exercising outdoors.

My husband was trying to empty his mind, which is what the MSI worker told us to do. I couldn’t empty my mind if you paid me serious money, so I closed my eyes, worked to control my breathing to a steady four beats in and four out (no matter how shaky those breaths were), and I mentally counted those 4 in and 4 out.

I won, not because I was the most relaxed, but because I was concentrating on something utterly repetitive. One line in the NOW Magazine article allows for this: “What adds an unusual and exciting twist to the game is the fact that alpha and theta waves are strongest when a person is calm and relaxed, or concentrating intently.” 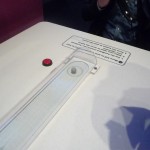 It’s no surprise that my powers of concentration are stronger than my brain’s ability to relax, but I sure was amazed that I beat my husband in this game.

It should also be noted that he made the mistake of opening his eyes and peeking at where the ball was. Maybe all the above is hogwash and he defeated himself. But every now and then, I like to gloat that I won at relaxing.