These diary entries circle around a drama in the life of a friend at my high school, a girl I met either through the Inner School Christian Fellowship or at camp. There’s a twist at the end, which I didn’t chronicle, but I remember it clearly. I’m just going to get right into it, so I’m not tempted to foreshadow the ending. I apologize, in advance, for how often I use the word “neat” in the first entry. 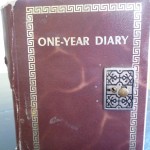 Saturday, Mary 17, 1984  EK is in town, she called me today and we had a talk. She told me about S, at her request. Her mother and her mom’s live-in boyfriend Tom both serve Satan. The two of them will move to B.C. when they get married and they want to send S to Jewish foster parents in Ottawa. When she said no way, Tom beat her up and she was put in the hospital. Nobody believed her. S also has cancer in her knee. Nice life, eh? Well, I think God is finally giving me something to do and someone to help.
I made a pair of pants today. I wore them to the coffeehouse I went to at AJ’s Pentecostal church. It was different. The music was OK. During the break some guy came and talked about temptation. That being tempted was a blessing because them Satan thought that you were worthwhile to tempt. That was neat. There was some more music 🙁 and then this neat guy Claude talked for 40 minutes: “Why sit we here ’til we die?” It was about the spirit and works of a church dying out. It was interesting. J and H were rather shocked because of the spontaneous Amen’s and Praise the Lord’s. I loved it. It was not the sort of coffeehouse that I expected but it was neat.

Sunday March 18, 1984  Last day of freedom 🙁  Dad was gloating about that after church. NERD. Young People’s tonight was a riot! We went over the to JJ’s for a social. I was playing snooker and I was doing really well. I was proud of myself. JP was nice to me today, so was JJ. I was pretty happy. Later on JP and M teamed up against P in hockey on that game. He was beating them 7-1 until I started playing goal. Then he beat us 9-2. It was a scream. Then all the girls except me went upstairs to sing. Someone up there couldn’t. I was left down with the guys minus N and D. We had earlier played coffeepot. I made a few funny remarks. The action was showing and JJ asked if you could do it in front of other people; they said yes. I said, I don’t know about you guys, but I don’t coffeepot in front of anybody. I made a few more remarks as well. The real story was on the way home. JP’s alternator and battery were shot in his Bessie. It took us 20 min. to get the car started at JJ’s that lasted us without lights or anything to Bayview and Soudan. We tried roll starting, push starting and we flagged down a car and tried jump starting. M was with us. We walked to the [minister’s house] and they were still up. [M’s parents] were there! They took care of M and the rest is too complicated to explain. I got home around 11:20.

Monday, March 19, 1984   S called me tonight to talk to me and I found out some more stuff. E has thought about killing herself! She almost did try once! I’m really shocked. I knew she didn’t like school at all but I didn’t know it was that bad. I’m meeting her tomorrow morning at 8:15. I met S and E this morning at 8:30. S still goes in for chemotherapy for her secondary cancer. It’s really hard knowing how to treat her. I called C and she gave me lots of good advice about not just sitting passively but actively doing something. Both of us feel that some disaster is about to happen: I don’t like that feeling. But I also do feel that God will somehow work through me. I hope. S needs all the help she can get. She went with her Mom and Tom to that group last night: she didn’t know she was going there. They tried lots of different ouija boards on her but none of them worked! Praise God! A whole bunch of them grabbed her and put “Satan” on her arm with red nail polish. She just barely got it off for school.
H skipped today because L wasn’t feeling well. I called their house at lunch. It took them a few minutes before they realized that it would be either me or N so they answered it. The didn’t even invite me!

Tuesday, March 20, 1984   Several big things happened today. We found out this morning that Mrs. Denny, the quiet nervous gym teacher died last night of hepatitis. I still can’t believe it. The flags were flying half mast. I’m glad. It shows that the whole school mourns her. The thing with S is also part of the way to being resolved, I pray. Her Young People’s leader called the Children’s Aid, and they called Mr. S at school. They came over and she talked to them and she has an appointment next week. Praise God! She had to tell them about E because she had been called down earlier for her absence on Monday and had told Mr. W about her. Tom and S’s mom had to come down and were really angry but I still praise God that something is happening. That’s about it, because besides that the day went as usual. I loved the discussion in English; we’re doing poetry. I love poetry! I should start to write some more; I think I will.

S was lying. She made the whole thing up: the cancer in the knee and the secondary cancer that had an amazing new kind of chemotherapy that didn’t make her extremely thick hair fall out too badly, the Satanist parents, the group of people writing Satanist stuff on her arms (she’d done it herself). All of it. Once school and other officials became involved, it all spun out. I found out from the school guidance counselor. I remember a hollow feeling in my stomach and disbelief, but not anger. There was even a little guilt in there because I hadn’t thought to talk to the guidance counselor or call Children’s Aid myself. My second reaction was compassion: she didn’t have to make up that story to get us to like her. I talked with her, either that day or the next, to tell her that, and to tell her that I wouldn’t drop her as a friend — my thinking being that she needed friends more than ever now that the story was out. We had a few intense conversations after this, and I was still friendly, but things weren’t the same and S soon drifted away. Probably to a fresh group of people to scam into pitying her.

Am I that compassionate now?

It depends on who’s doing the lying and who they’ve hurt.

I’ve written before about a woman at our prior church who was highly skilled in planting seeds of discord to distract us from the fact that she was stealing from us. She would give little reports of conversations with other church members that were racist or obnoxious in some way, or do little put-downs that were funny in how she said them. She got involved with someone who brought a great deal of drama that we were all compelled to help her out with — money, groceries, clothes, etc. She was my partner in dance and I’d thought we were friends. I gave her money, listened to her, prayed with her, had her pray for me. But she was stealing from us the whole time.

It almost destroyed the church — literally, I’m not being dramatic. Two-thirds of the church left in the aftermath, and those of us left had to deal with the trauma, except that we didn’t. We who remained all went to our corners to lick our wounds and treat everyone with suspicion for a while. I was stuck with some very large jobs when she left, that dictated the next eight months of my life. They were not good months.

It took several months of Spiritual Direction before I wrote a letter to her about what she did to me — the classic, unsent therapy letter. By the end, I felt profoundly sorry for her. Her life had gone even more to pieces after this: criminal prosecution, physical disability, no friends or church support system. I forgave her in absentia. That said, I could never be her friend again and if she came to any church I went to, I’d make sure she wasn’t given any position with authority over or access to money. I have no idea whether I’d hug her or ignore her if I saw her again. But chances are pretty good I’d make like I didn’t see her unless she forced the issue.

Then again, we had a situation this summer about which I will be vague, but a young person we’d trusted did something untrustworthy. My reaction: firm compassion. We forgave the young person immediately, largely because the person had been to our house hundreds of times with few problems, so the evidence weighed heavily in the person’s favor. It was firm compassion, though, because we analyzed the events that may have contributed to the untrustworthiness and don’t let things play out in the same way anymore. This is just as much out of compassion for the young person as for us.

But if a young person does something untrustworthy and I don’t have the long history with them, or if the untrustworthiness has to do with the personal safety of anyone in my care, they are not invited back. There are only three kids who’ve qualified for this, but my door closed to them quickly and decisively.

Because of the lying church lady who so effectively used gossip to split up the congregation, I no longer listen to negative church gossip. If someone starts going on to me about what another member did or said to them, I stop them in the middle and tell them that I’m uncomfortable talking about this, but if they have a problem, to bring it up with the other member and the pastor. I’m not always in the loop these days, but that’s okay with me.

I also have a little core of suspicion that won’t go away when someone keeps bringing the drama, and that makes me a little sad. I’d like to treat everyone who needs help in a straightforward way, but I don’t know that I can anymore. I’ll have to find a way to keep myself from being gullible and yet remain compassionate.

Anyone else want to share a dramatic story about a liar?

3 thoughts on “What Do You Do When Someone Lies To You?”