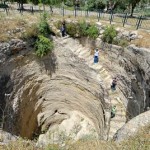 [possible pool of Gibeon, from bibleplaces.org]

The old commander looked as solid as he always had, although his hair and beard were now completely grey. Abner and his men were dressed in short leather battle tunics, too. Joab had made the right choice.

“About time!” Joab yelled across the Pool of Gibeon.

Abner stood with his feet planted wide and his arms crossed.

Abner raised his hand and his men sat as one.

So Joab had to order his men to sit, which they didn’t do in unison. The back of Joab’s neck burned as if Abner’s men had shown up his, which they hadn’t. Not really. He pointed to his left to indicate a spot halfway between them, by the stairs into the water.

The old commander dropped his belt and sword, unwound his mantle, removed one dagger and did a slow turn with his arms wide open. Then he gave Joab a “your turn” gesture.

Joab sighed. Fine. He’d take off his weapons, too. He dropped his shield, shucked his sword, unhooked his waist dagger and then tossed the dagger from his left thigh holster so it stuck in the ground point down, handle waving. He poked his own chest and pointed at Abner, who reached inside the neck of his tunic and pulled out another dagger. That was the benefit of having defectors on your side: they could tell you all your opponent’s tricks.

“Stay here,” Joab said to his brothers and his men. “But don’t take your eyes off the men across the way. Assign people to watch the opposite hills, and me, and him. Be ready for my signal.”

Abner sauntered to the meeting spot, hands clasped behind his back, but Joab strode there. He wasn’t going to pretend this was a pleasure visit. “Greetings, Commander of the Armies of Israel.” Joab loaded his voice with contempt.

“I’ve heard I might say the same to you.”

Joab’s claim was not a joke, no matter how lightly Abner took it. “You called this party.”

“To discuss what we might do to further our kings’ agendas.”

“And do some intelligence gathering?”

“Have you gone blind in your old age? Those are combat veterans who’ve fought hand-to-hand against Philistines and Amalekites and come out on top.”

“Of course, of course,” Abner said. “I mean you no disrespect.”

“Are you going to get to the point?” Joab picked at a bit of dried blood on his tunic. “I thought we were men of action, not old women who need to gossip for half a day before getting around to business.”

Abner chuckled. “Have it your way, but from one commander to another, you’d do better to avoid that way of speaking to your superiors.”

“Are you referring to yourself? Because I will happily dispense with all these niceties and take you on myself.”

“Calm down. I meant David. Even though you ran together as boys, I bet he still wants to be treated like a king.”

Yes, but Joab didn’t meet Abner to have a heartfelt chat about it. “Thanks for the advice. Will you get one with it now?”

“You’ve been after yours to do something decisive?”

“So you’re as frustrated with Ishbosheth as I am with David.” Joab made that a statement, not a question.

“So what are we going to do about it?” Joab scanned the hills behind Abner for any telltale glint of a sword. “Not ambush me, because one move from you and my men blow the trumpet and a delegation will rush to my aid.”

“How do you think we survived so long on the run from you?”

“No need to be offended,” Abner said. “I merely complimented you. Shall we dispense with this charade and call our reserves, then?”

So Abner had hidden back-up, too. Joab made a show of nonchalance although there was thunder in his ears. “Is that a declaration of war?”

“We came all this way,”Abner swept his arm towards the east. “Across the Jordan, over the mountains, through the wilderness. It would be a shame to travel this far without engaging in some kind of combat.”

Some kind of combat? “What did you have in mind?”

“I made the first move.”

Joab sliced his hands through the air. “I don’t know what I was thinking. David has forbidden me to attack you and you’re clearly not going to oblige me by attacking first. This has been a huge waste of my time and my men’s time.”

“Almost forty, and still you lead like a hot-headed boy.” Abner spoke quietly, almost to himself.

Nothing Abner could’ve said would have made him angrier than that. More so because David told him the same thing. He’d show them. “The Philistine kings-”

“Cut it.” Joab lunged towards the old man. “That line might work to rile up your men, but you know what we were about with the Philistines.”

“Yes, yes. You used them as cover to dig your claws deeper into Judah. Very smart. What did they teach you?”

Plenty that Joab had no intention of saying now. “The kings of the different cities liked to get small groups of their best soldiers together for fighting exhibitions. But all the winners got were bragging rights.”

“I’d like better stakes, but I’ll take it. You’re on.” Joab looked back at his men and calculated how many he could afford to lose if about half of the group were bested by Abner’s men, which was a fair assumption. “Twelve men.”

“What do you mean no weapons? I thought that was the point of this, to see who was better. You’re afraid of our hardened iron. That’s it, isn’t it? You know that our equipment is so superior to yours that you—”

Abner put up his palm. “A wrestling match, but they can keep their swords nearby on the ground. Does that make you happy?”

“As a bee after the rains.” Joab stalked back to his side, muttering about Abner’s patronizing attitude. “Men! We’ve got action!”

It took longer than he thought it would to choose twelve men who could win, but that he could also stand to lose, which meant that neither of his brothers made the cut. They were good, well-trained soldiers who took the news with proper stoicism, but once the twelve men had gone to the strip of clear land just south of the pool, they let their feelings be known.

“You know I’m better than them,” Asahel whispered.

“I could beat ten of them by myself,” Abiashar said. “I’m their unit commander. What does it look like that they fight while I stand?”

“I need you both too badly.” Joab put his weapons back on while talking. “I won’t risk losing you on some stunt of Abner. If this is an ambush, our soldiers will need your leadership.”

That seemed to placate them.

He and Abner moved among the chosen, pairing up fighters, each one switching men out for others. Finally, it was time to fight.

The rival units were no longer on opposite sides of the pool, but were spitting distance from each other, crowding close to egg on the wrestlers.

At first, Joab tried to show the same gravitas as Abner, the same calm leadership. The first time one of his men hit the ground, he grunted to himself. The second time, he clenched his fists and growled until the man got up. The third time, he gave up and screamed and waved his arms like the rest of his men were doing.

Every match was close. The thuds of bodies hitting bodies and the ground, the grunts of pain and effort, the trash talking — it was intoxicating. Joab looked to his right and his man knocked the feet out from under Abner’s man. Joab’s side cheered, but then Abner’s man levered up suddenly and kicked Joab’s man in the face; they heard the crunch of his nose breaking, and blood from it dripped down his opponent’s back as they grappled.

Then Joab looked to his left and Abner’s man kicked his man in the stomach, which made him fall to his knees. Abner’s man leaned over and prepared to kick again, but then his man pushed up and drove the back of his head into Abner’s man’s face, causing him to stumble back, clutching his eye.

Joab didn’t know who first screamed it, whether it was him or one of his men or Abner or one of his men, but once the words, “Pick up your swords,” were out there, the wrestlers lunged towards their weapons and grabbed their opponent by the hair. Each pair looked like a strange creature attached at the head. Someone gave a battle cry and the wrestlers gave up the pretense and went at each other. Within a few heartbeats, all twenty-four fighters lay on the ground, dead.

There was a pause, and then a roar from each side as they surged past their dead comrades and fought like enemies.