My theme word for 2014 was soft-hearted, which came on the heels of the not-on-purpose 2013 theme of compassion. A soft heart is a spiritual condition, which means that my heart should be softer/more open towards God, and because of God, which should come out in how I am with others. And you know what, I think my heart is softer.

I know I’ve been listening more than talking; my sporadic presence here on the blog reflects that. I’ve been more alive to the fears that lie behind so much human behavior, which has made me less judgmental. I’ve been slower to anger. My starting an anti-depressant this spring has something to do with that, but I’ve also been using my imagination in a disciplined manner, creating backstories for people who annoy me, until I reach the point at which I’m no longer annoyed. Mostly I’m not perfect at it, but I’m sure better than I was a year ago. I’ve been less irritable and more gentle with my family. I no longer try to compete in my mind with my husband on who has more stress, on who has it tougher.

There has been a related sub-theme that emerged throughout the year: acceptance.

In January, I went through all the family boxes of papers, including every letter and card ever sent to me, including notes left in my locker in high school. As I sorted and categorized (and tossed some stuff), I read what people have written me over the years. It was a revelation. Normally, I think of myself as kind of a bad friend. I rarely reach out and make contact. I’m too much of a hermit. I so frequently fail to follow through on things I’d like to do for my friends (most of which they don’t know about because I didn’t do them). I’ve let people I loved just fall through the cracks until I’ve entirely lost contact. All of those things are true, but the letters and cards let me round out that picture: I am an accepting friend. Over and over in these letters, friends from across my life said some version of the words, “I can always talk to you about things and know you won’t judge me, that you’ll still accept me.”

That was huge. It took awhile, but I let those words wash over me and seep into my heart. Because they’re true. I may not be a great friend, but I am an accepting one. So I took that on as an important part of my self image, and my life became crazy rich with variety of people to love this year. I am now friends with a woman who survived years of drug addiction and sex trafficking. I have more non-religious friends than I’ve had, possibly, ever. I stood on a sidewalk and talked with strangers about praying for girls and women who’ve survived abuse and trauma. And I’ve been more real, more courageous, more risk-taking than ever before. Which has only brought about more connection with people. It’s been a glorious cycle. And one I intend to keep going.

So what is this year’s word?

It was going to be show up. But as I was writing my prayer this morning as I prayed it (for only the second time this month, tsk, tsk, tsk) it morphed into practice. Both in the sense of the things I want to work on: prayer practice, writing practice, dance practice. And in the sense that “we call it practice because we’re not that good at it yet” (something a dear friend who is a spiritual director said once, a couple of years ago, and I can’t get out of my head). So I will both go harder after my various practices, and be accepting of myself when I’m not that good at it. I will practice both patience and impatience, simultaneously (something one of the presenters at my November writing conference said).

Because this is going to be a big year.

So how about you? Any musings, either looking back or looking forward, that you want to share? Do you do the word of the year thing? If so, what’s your word?

I’m going to say this straight out, rather than ease you and me into it, and possibly lose some of you in the process: I believe that God communicated with me with words.

It was last fall, just as I was realizing that all the work I’d put into the David and Saul story was coming to nothing. There were a couple of rejections yet to arrive, but most of them had come in with no requests for more material. My queries were dead on arrival. Even the two publishing contacts I’d made in person came to nothing, as well. Not “no’s,” but nothing; no communication at all. I’d been so hopeful. This was the project that could really go somewhere. It felt so different from any of the other work I’d done, better, right-er. It was the idea I’d been praying for, the idea that brought together so many of my passions. And then zilch.

So I went outside to do some raking and complaining to God. And then this message filled me (I say that because I didn’t hear an audible voice, just a strong impression of these specific words):

“Just because my hand is on you, doesn’t mean it’s going to be easy.”

On the one hand, this is confirmation: God’s hand is on me.

On the other hand, it’s going to be hard.

God is rarely this clear with me. When he’s communicated something specific before, it’s subject to interpretation. It’s more usual for God to communicate with me by what I call piling on: the same word or idea coming at me from everywhere. Recently it’s been the word “practice” — prayer practice, writing practice, Pilates practice, spiritual practice, practice, practice, practice. A good friend who is a spiritual director and a poet is the one who started it: “That’s why we call it a practice, because we’re not very good at it yet.”

Because I’m not very good at it. Yet. 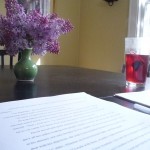 Indeed, the book project I’d been so dejected about: there was a big hole in it. I needed my winter of whine to make me realize it. So I put in the work this spring. Writing practice.

I recently added something to my prayer practice. Most days, I write my prayers, freeform, but after my friend the spiritual director/poet recited the following prayer at book club and I cried my way through the whole thing, I knew I had to add it. It speaks hard to me as a writer, impatient for success, for publication. For (dare I say it) validation.

The author is fascinating, as well, and I plan to look into his life in more detail: he was a Jesuit paleontologist during the first half of the 20th century. He studied evolution and explored the spiritual implications of that scientific work. Look for something about him in the future here at won*der.

Above all, trust the slow work of God.
We are, quite naturally,
impatient in everything to reach the end
without delay.
We should like to skip
the intermediate stages.
We are impatient of being on
the way to something unknown,
something new,
and yet it is the law of all progress
that it is made by passing through
some stages of instability —
and it may take a very long time.
And so I think it is with you.
Your ideas mature gradually —
let them grow,
let them shape themselves,
without undue haste.
Don’t try to force them on,
as though you could be today
what time (that is to say, grace and
circumstances acting
on your own good will)
will make them tomorrow.
Only God could say what this new spirit
gradually forming within you will be.
Give our Lord the benefit of believing
that his hand is leading you,
and accept the anxiety of
feeling yourself in suspense
and incomplete.

There are so many moments in this prayer that pierce me. “the slow work of God.” “And so I think it is with you.” “his land is leading you.” “accept the anxiety.” “in suspense and incomplete.”

But I’m practicing. This past weekend I stepped out big time to attend a writer’s retreat, the Renew and Refine Retreat for Writers. It was small. Fewer than 20 people. There would be no hiding. I was anxious. Okay, I was terrified. I would have to put myself out there as a writer, with other writers. But I accepted the anxiety and went and met wonderful people. We laughed and cried and prayed and worked together in the kitchen and ate very, very well. I was so deeply encouraged by my time with them, both specifically (after I read my work) and generally, as kindred spirits driven/called to work out our faith and our lives in words that we are driven/called to share. I hope I was able to encourage even one person there as much as I was.

So I’m moving ahead with a little more courage than I was before. Revising my materials. Getting ready to send out It Is You again.

Practicing my trust of the slow work of God. His hand is on me. But it isn’t going to be easy.

What are you practicing? What might accepting the anxiety give you the courage to do?