[This is a flash fiction piece I wrote for the NYC Midnight Flash Fiction Challenge. I was given the assignment of writing a ghost story that took place at a university cafeteria that included oven mitts.] 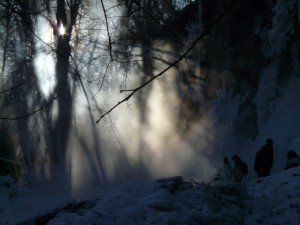 It was a good thing the roads were empty. Henry’s mind was not on his driving.

I won’t go into the dining hall until the sub buns are in the oven.

I’ll go when I’m through #5 on the checklist.

He’d gone in too soon yesterday and it was the only day … it … didn’t happen.

The university glowed white in the valley, shrouded in ice fog. He blasted the defogger and crawled along by memory. Soon he stood in the kitchen threshold, watching the path he’d opened through the ice droplets drift shut. Within seconds he was as closed-in as the door would make him in a moment. He sighed.

He walked in and flipped the light switches. The fluorescents above his worktable were still broken. He could climb up and loosen the bulbs, himself, but the flickering couldn’t make him feel any more unsettled than he was. Besides, the funeral director told him not to take any physical risks for a while.

Instead, he worked the list, wheeling the sheet pan racks of sub buns out of the freezer and parking them near the ovens to thaw and proof, dumping the foccacia ingredients into the 40 quart mixer and putting the dough hook to work, and getting the 20 quart mixer going on the muffins.

Which left his mind free to circle back to the same issue.

His nose could tell when bread was done and when chocolate chip cookies were the perfect amount of un-doneness. But it couldn’t tell what that floral scent in the dining hall was.

Was it lily of valley?

Right after Emma was born, and then every birthday since, he’d gathered her a fist-thick bouquet of them.

Or was it rose? From her hand lotion?

What had made him step away from the ovens and into the gloom of the dining hall on Monday? It was pure pain to imagine what should have been: Emma, laughing and eating his good food, baked with extra love because his daughter was a freshman.

He’d explained the scent away at first. The cleaning crew was probably using a new product. Tuesday, he couldn’t stay away and he smelled it again, but it didn’t have that sharp disinfectant edge and it wasn’t spread throughout the room. He asked around, but there’d been no change in the cleaners’ routines.

Could a student have spilled perfume?

When he caught a gentle wisp of … something in the air on Wednesday, he dropped and almost buried his nose in the industrial carpet. It smelled like rubber. He scrambled up, closed his eyes, and chased the scent around the room until the 4 a.m. crew arrived.

His sister had seen their mother after she died.

Two of his nieces had seen his father after he died.

One of his nephews had seen and heard his own mother after she died.

There was family precedent.

That was why he’d rushed it on Thursday and why he was going to be smarter today.

When the mixers were quiet, the tchick of the minute hand echoed in his head. No matter how many times he checked, the digital clock on the microwave agreed with the analog clock on the wall. Three-thirty wasn’t coming fast enough.

Until there it was. Too soon.

Henry’s heart felt like it was both stopped and racing, although that was impossible. Instead of filling the remaining muffin papers, he wheeled the batter and the waiting trays into the fridge. He put on his long oven mitts and took the first batch out, sliding each sheet pan as methodically as he could manage into the slots of the waiting cart. Only eight muffins hit the floor. And then he pushed through the doors to the dining hall.

Normally at this time, the world outside the windows was thick black, with campus security lights illuminating the paths and highlighting a few trees. But now the ice fog diffused that light, making the unlit room oddly bright. There was no world beyond that white glow, nothing to see, no shapes to make out. Nothing.

His breath stuttered in his throat.

That was what Emma used to call ice fog. Regular fog was God’s breath, but ice fog was ghost’s breath.

He breathed in for several long counts and out as briefly as he could and not pass out. He scanned the room through his peripheral vision. He was making himself light headed.

The desperation and hope in his voice made him cringe.

“I love you. I miss you so much.” His voice cracked like a teenager’s, but he kept talking. “I don’t know what to do now. I’ve been asking all those ‘why’ questions I was too strong to ask when you were still with me. Not getting anywhere with them. Which you warned me about.”

And then the floral aroma coiled around him. This time it came with a chill.

“Is that my lily of the valley?”

Out of the corner of his eye, he saw a shimmer.

It thickened into a woman in an ugly hair net and the kind of uniform the cafeteria workers wore fifty years ago.

It started out as a whimper, but ended in a rough scream. “How dare you get my hopes up!”

He shucked his oven mitts and tried to grab the ghost. His hands swept over the nearest table, but it was empty, so he picked up the gloves and threw them at her.

“How could you be so cruel?”

He hoisted three chairs over his head and hurled them in her direction.

But she was gone.

She was gone. His Emma. Gone.

He crumpled to the floor and howled, insensible, inconsolable.

It started Thanksgiving 2012. My parents-in-law’s best friend was dying; he died, too soon, shortly thereafter. My father was diagnosed with cancer on my birthday. My daughter had a mysterious hand infection that puffed her hand way out no matter what medication we gave her, and we wound up in the E.R. for overnight antibiotics, while one of my dear friends was in the hospital next door struggling for breath. She died a month later, way, way, way too soon. And that was only early January.

There were 3 more E.R. visits for my daughter. Two back surgeries and resulting recovery times before my father could get treatment for his cancer. Both are doing well now, but there was persistent worry in a corner of my mind all year.

There was complete lack of movement in getting my David and Saul novel closer to being published: no requests for a full manuscript from any agent I queried. None. No professional interest in the picture book project I’m working on with a friend. I was turned down for a job I would’ve been really good at. I didn’t get enough volunteers for a church thing, so had to scrap some plans that would’ve been good for the kids. I’ve never been rejected so many times for so many things in my life.

My children each had struggles where they haven’t before, some of which are ongoing. My husband’s heavy work schedule continues to wear us down. I’ve read maybe half the number of books I normally do; after my friend died, I just didn’t have the urge. Insomnia. Anxiety. As the year went on, my hermit tendencies have become even more entrenched.

But this has also been a great year.

When you’ve cried with people, and you’ve shared grief, you’re closer to them, so I’m closer to a lot more people than I was a year ago, even some I’ve known for a long time. We made some real friends at the new church. I’ve given some good encouragement to dear friends. I got through the Old Testament in my devotional reading (finally!) and done some good struggling with and resting in God’s promises. My faith is deeper than it was a year ago.

My children have had also triumphed, and I’ve gotten to stand up and cheer for them. My husband is doing really good work, both for pay and for fun — and he’s writing songs again! I’m taking a dance class again. A class for which I will get to perform in a recital (a phrase that makes me giggle).

The fine folks at One Faith Many Faces gave me paid work and thought enough of my writing here to want to rerun it on their site. I went to a small writer’s retreat, where I met some fine writers, reconnected with an old friend, and got some much-needed encouragement. There has been some other paid work, some guest posts on other blogs (on prayer and dance), and some wonderful conversations here. I am grateful for every person who’s read my writing — that means you. Thank you.

I’m grateful, but also deeply frustrated and sad, often about the same things. So I wrote something about Thanksgiving for my friends at One Faith Many Faces (they’re the ones who gave the post it’s awesome title) that I needed to hear — something all of us who are feeling both gratitude and grief this year.

Some years, you’re so full of gratitude that it seeps out of your pores and suffuses everything you do.

Other years, the idea of spouting words of gratitude seems so wrong as to almost feel offensive.

Sometimes, those are the same year.

A tough year can bring out your gratitude to God for being with you through it all – but lurking behind every item of thanksgiving is a great big but. The Psalmist knows what that’s like:

Please continue here to read the rest of Thanksgiving is a great big but.