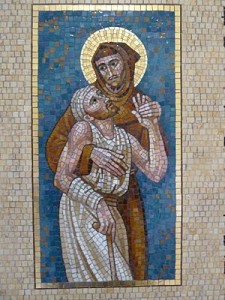 The person who has the leprous disease shall . . . remain unclean as long as he has the disease; he is unclean. He shall live alone; his dwelling shall be outside the camp.          Leviticus 13:45-46 (NRSV)

Skin diseases were serious business for the ancient Israelites, but what could it have to do with us today? We’ve conquered most ailments that plagued them, including Hansen’s disease, aka leprosy.

Beyond offering thanks, we can take it to a spiritual level.

What, then, is spiritual leprosy?

The human body has many parts, but the many parts make up one whole body. So it is with the body of Christ . . . we have all been baptized into one body by one Spirit, and we all share the same Spirit.     2 Corinthians 12:12-13 (NLT)

We have spiritual leprosy when we do not feel or acknowledge the pain in (what we see as) our body-of-Christ extremities: fellow believers who are different from us (whoever the majority “us” is in your part of the kingdom), either in looks, upbringing, worship style, socioeconomic status, political affiliation, developmental ability, country of origin.

It’s dangerous for the same reason physical leprosy was so harshly dealt with in ancient times: because it spreads. And the more it spreads, the more disfigured our Christian communities become: less hospitable to the widow, the orphan, the stranger at our gate, not to mention the hungry, the jailed, the immigrant, the broken.

Plow up the hard soil of our hearts. Help us to listen wholeheartedly. Help us to not see our part of the body of believers as more important than another part. And thank you, Lord, for Jesus. He was not afraid of lepers. He touched them. He healed them. May he heal us, too.

One thought on “Spiritual Leprosy: A Devotional”