This promise from Romans 8:28 is one of my favorites:

And we know that God causes everything to work together for the good of those who love God and are called according to his purpose for them (NLT).

I repeat it to myself a lot when things aren’t going well or when terrible things happen to people I love. Depending on the distance from and severity of the event, it’s either encouraging or almost offensive — or both. The idea that trauma can somehow work for good is offensive — why not remove the trauma and figure out some other way for the good to come about? But there it is. In the Bible. And I’ve seen it in my life. I have a friend who can acknowledge the good things that happened in her family because her father died when she was young. Another friend went through a horrible illness, yet in the process of needing so much care, came to know in her bones that her father loved her — something she’d felt insecure about before. So there is pain in this promise, but also hope.

I’ve been part of churches that had to cling onto this promise by our collective fingernails. In one church, there was a situation that halved the membership. It was traumatic and upsetting and terrible. And yet. There were some of what is called, “blessed subtractions” — people who’d become negative voices in the church left. Which meant we could move ahead in different ways than we could when they were there. It took some time, but we were stronger and more unified and built a firmer foundation for growth.

I’m not saying it wasn’t hard. It was, in fact, one of the worst years of my life, at the end of which I blew up at someone who didn’t deserve it, had to apologize to her and ask her forgiveness and accept it when she gave it (yes, it was difficult to accept forgiveness). It was awful. But what came of it was deeply good, both in the life of the church and in terms of my spiritual growth.

Despite knowing what it felt like to be one of the remnant, I left that church last year. It was hard. I’m still sad about it. But I can see things working for good in my life and my family’s life because of it.

And here’s the kicker: I can see it my old church, too. My leaving made people sad, but it did not devastate the congregation. In some ways, it set people free and things are better because I’m gone.

We like to think of ourselves as setting people free from their insecurities, pretensions or anxieties by the wise and insightful things we say or our warm heart, or the intentional way we live. But sometimes we need to leave. 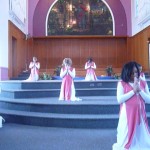 My previous church is experiencing a glorious renaissance in dance. I was a dancer there. Although I’d always been happy to dance under someone else’s leadership (and three of the best dances I’ve ever done were under someone else’s leadership and choreography), the last several years there, I was the sole one who organized and choreographed group numbers. I loved doing it, and did some wonderful work with kids and adults there, including my favorite, the Lord’s Prayer dance in the picture to the left. But I was also the sole one left doing children’s worship, as I had been off and on for many years. I was burned out.

People would encourage me to dance more, always out of enthusiasm and an appreciation for my gifts, and the kids who loved to dance always wanted to do it more (including my own child), but I had no “more” to give. I’d politely evade the request/comment, while inside I was a stew of stress, guilt, and exhaustion.

Somehow, I never said to anyone that I didn’t have to do all the dance stuff, that if someone had an idea, they could go for it. It would have been easy to say. So easy. It wasn’t like I thought I needed to hang onto control of the ministry, but that was the result. I feel bad about that now, because I held people back. One woman in particular only got to dance a couple of times while I was there, but I’ve seen her in church videos many, many times now, almost weekly for awhile, and I haven’t been gone a year.

When I first started seeing this, oh the guilt I poured down on my head. But I’ve gotten to the point now that I can recognize that it’s God, making everything work together for good. It’s embarrassing to me that it took me leaving for my church to get really into dance, but I’m happy for them. And grateful that God used me, even if it in a negative way.

Anyone else out there brought positive change to a group or organization by leaving? Or am I the only one?