In the icebreaker game, “Tell us something about yourself that you don’t think is true of anyone else here,” I have an ace: I’ve been in a plane crash.

It was January, 1986. I was 18 and I traveling from Toronto to Grand Rapids, Michigan (via Pittsburgh), to visit a friend at Calvin College. The weather was cold and icy, but that’s normal for winters in both places. We were scheduled to have a brief touchdown in Erie, Pennsylvania, but as the time for that drew close, the pilot told us that we wouldn’t be making it. Shortly after that, the pilot came on again: something was cleared up and we were going to go there.

You know that heavy rushing sound that lasts for maybe 20 seconds when a plane is first landing? It never ebbed. The whine just got louder. That was the first clue that something wasn’t right. Such a subtle clue, but enough that I tensed my legs and pushed myself back into my seat. There was a thud and snow flew back, obscuring the view out of the windows, so none of us knew what was happening, other than, “we hit something” and “we’re not stopping.”

And then silence and stillness.

The flight attendants were just as calm as you’d hope they’d be, guiding us to the front of the plane, telling us not to worry about our stuff, but to keep moving forward. To the slide.

That was when I started shaking.

“The DC-9 went off the runway at about 9 a.m., rumbled down an embankment and came to rest straddling a local road” (from the AP story). It might be the embellishment of imagination that I saw a car pass under the front of the plane, but I know I watched a car stop on the side of the road (how could you not!?!), and another newspaper article said that the plane blocked the road. 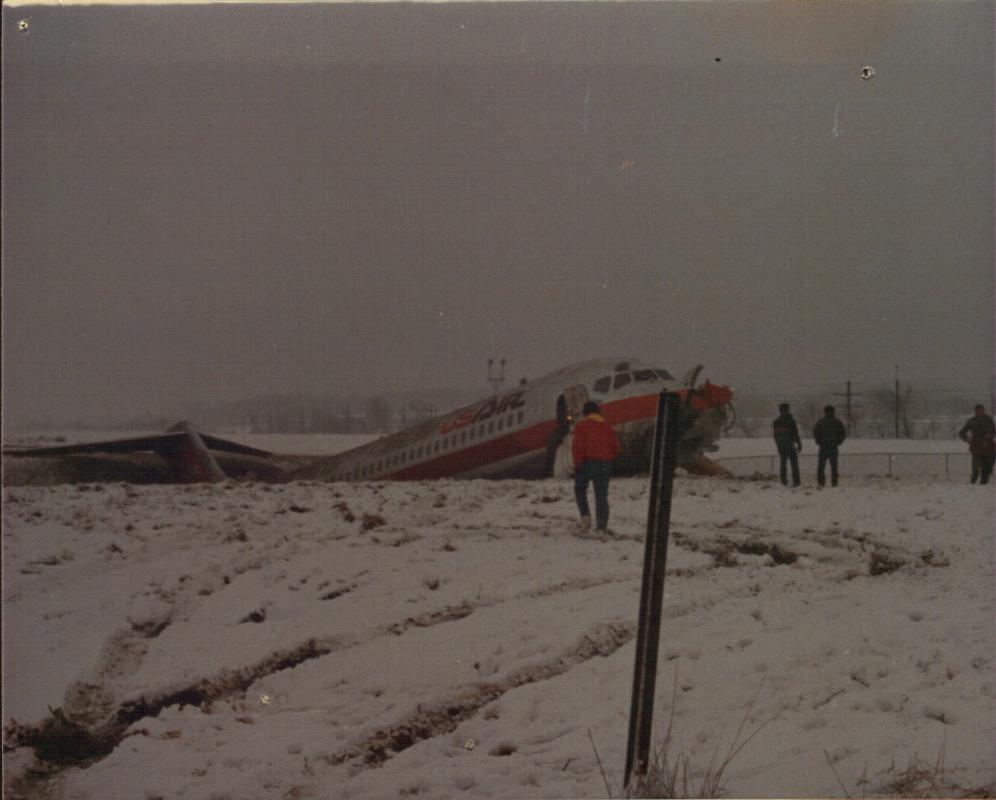 There was only one injury: a woman bumped her head when she stood to evacuate the plane. We were bussed to the airport and put in a bright and airy room where several men ordered whiskey–at 9:30 in the morning. I kept it together very well. There was a gospel singer whose work I was familiar with on the plane, and I sat at her table.

When it was my turn for the phone, I called home, although I was pretty sure my mother was teaching. So then I called my dad at the office. I was working for him at the time, taking a year off between high school and college. He was having an important meeting with huge clients, but I had to talk to someone. So when I got the secretary and she told me in an irritated tone that he was in a meeting, I was just petty enough to take a little satisfaction in saying, “Well, then tell him when he gets out that I was just in a plane crash,” and having her rush off the phone to get my dad. My official reason for calling him was to let him know that I was okay, in case the plane crash made the news. But it wasn’t going to make the news. I just needed to hear my dad. And take the opportunity to not handle it like a grownup, and cry like a kid.

Writing about that phone call has made me cry all over again.

So what is your go-to story for that ice breaker game? Please share in the comments.

My favorite one (other than my own) is from the older student in my college freshman composition class: “I have 5 kids.”

11 thoughts on “I survived a plane crash”