In two YA/MG books I’ve read this summer, the female protagonist is sarcastic, both in her own head and with others: Hourglass, by Myra McEntire, and Kepler’s Dream, by Juliet Bell. (Gorgeous covers, both.) 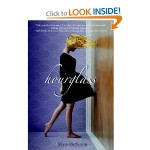 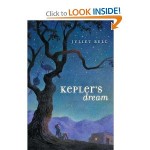 They are very different novels, but Emerson (from Hourglass) and Ella (from Kepler) both use sarcasm as a protective shield. In Emerson’s case, she’s 17, so she self-consciously uses it to keep people distant from her because she sees dead people, spent time in a psych ward, and has secretly gone off her meds — she wants to protect others from her crazy.

Ella has been stuck at what she calls Broken Family Camp with her severe grandmother (who she’s never met) in New Mexico while her mother undergoes a stem cell transplant for leukemia in Seattle. She takes refuge in her sarcastic observations about the people and the place she’s stuck in.

Wisecracking, sarcastic, kick-butt heroines are “in” now. I support the trend to have strong female protagonists, but I wish they didn’t always have to be so sarcastic. Because the thing the character does to keep everyone else at arm’s length or as a sign of her disaffection, keeps me feeling distant from the character I’m supposed to be attaching to. It does to me what it does to everyone else in the story. Being party to the character’s interior talk rarely helps, because they seem so distant from their own emotions. And in the 11-year-old character, it made her seem a little old for her age.

I kept reading both those books, despite feeling an initial disconnect with the point of view characters, and they turned into wonderful stories. Emerson and Ella grew on me as their situations got both better and worse, and as they showed more vulnerability and connected to the people around them. Hourglass is a fast-moving story with loads of tension and strange stuff happening and secrets and paranormal business. Kepler’s Dream is a quieter story, not as flashy and not at all paranormal. But as Ella got to know the people and the landscape at her grandmother’s, the sarcastic names she gave them became more affectionate. At the end of the book, when she slyly clues her grandmother (Violet Von Stern, which is an awesome name) in to the nickname she calls Violet — the GM, for General Major of the Good Grammar Correctional Facility — I got teary, because it was a sign of comfort and security in their relationship, especially when Violet gets the joke on herself.

Another book I read this summer, The Magicians, by Lev Grossman, had multiple characters who were sarcastic and disaffected and kept everyone at a distance, and I could barely finish it. I found almost all the characters unpleasant, distasteful, whiney, bratty, and mean. I have not picked up the sequel, and I won’t. I don’t want to spend any more time with those people.

But it’s an interesting thing to think about as a writer: what do you do when your character’s coping mechanism keeps the reader distant as well? How do you keep them reading until your character starts to mature? Do you show a core of sincerity behind the sarcasm to tide the reader over until the character grows? Some other positive character trait? It brings home to me how difficult sarcasm is, as a voice, to balance. How much is too much?

I tried it, once, in a romance manuscript. I love a wisecracking romance heroine, and I’m pretty snarky in my own head, so I thought I could pull it off, but it didn’t work for me, didn’t sound right. I had to rewrite it with the character generally being more sincere and only very occasionally sarcastic (and even then, the ms. isn’t seeing the light of day). Now that I think of it, there aren’t any sarcastic characters in the first David and Saul manuscript: David is made fun of for being so honest and upright, Saul is sometimes cruel and closed-up and sometimes open, Samuel can be cryptic but with a sense of humor, David’s oldest brother doesn’t hide his meanness. So they certainly aren’t all pleasant, but no sarcastic wisecrackers.

As David matures through the next two books, he won’t be able to remain so honest and upright: he lies to priests, pretends to be crazy, has to figure out how to survive on the run, becomes a mercenary while lying to his host king. He has to learn how to be diplomatic, which is all about maintaining an aura of sincerity while twisting the truth to your purposes. But no sarcasm. I seem to have a problem with it.

How do you respond to a sarcastic main character?