Last week I complained that I couldn’t go to a writer’s conference I really wanted to go to. And then my husband insisted that I go. So I went. This is my attempt to articulate how monumental a gift the Writer Unboxed UnConference was.

The Don, Donald Maass, would not let us take the easy way. He insisted, over and over, that we not use the first metaphor, the first emotion. He would say, “Write down the dominant emotion your character is feeling in a particular moment. Now write down another feeling. And now another. Use this third thing.”

So I’m going to apply this technique to what was, without exaggerating, one of the best weeks of my life.

Yes, it was like summer camp, with its intense emotional connections, its sessions, its bonfires (aka Bedtime Stories). But without the mean girls, the peer pressure (although I *did* have my once-in-a-decade after-dinner cigarette), or the inflexibility of scheduling (nobody got in trouble for skipping a session).

Was it a mountain top experience? That gets at the transcendent feel of the week, but we spent time in the valley, too, grieving for writer friends who’d died and getting real about the struggles of being a writer.

It was a quest.

A heroic one, even.

It was not a quest to be published, or to find the right agent, or meet the right editor, or to practice our elevator pitch, or to learn about marketing and social media (although those were active concerns for many).

There was one overarching purpose: to learn how to become the best damn storytellers we can be. So even the well-published authors leaned towards the same goal as the unpublished. For this week, we were all learners and supporters of other learners. We focused on our path as writers. The presenters came to Bedtime Stories (when anyone could read from their work). They went to sessions. They didn’t stick to their own vaulted company, but sat at the bar with anyone, played poker with anyone who wanted to sit at the table. The published went to lunch with the unpublished and were genuinely interested in what the unpublished were writing — I know this because they asked follow-up questions and made comments that showed that they had listened to the answers. I’ve been to enough writer’s conferences to know that this was truly an UnConference.

There were trials, of course.

There were 5 sessions slots every day from Tuesday through Thursday (from 9 a.m. – 10ish p.m.), with 30 possible sessions (oh, the choices we were forced to make!) with one long workshop all day Friday. I took 51 pages of notes. And I have teeny writing. 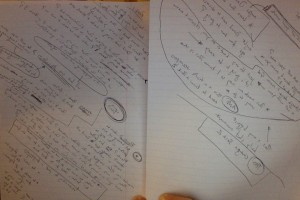 Every day, I learned at least a dozen things to apply to my works in progress or to my life. I pretended to be one of my characters while I chatted with other writers who were pretending to be one of their characters, and I had to order garlicky hummus because that’s the only menu item my character would be comfortable with (and then I had garlic breath all day). This method acting/eating/writing session gave me some insights into my character that I would never have gotten otherwise. I thought about beginnings and middles and character arcs and secondary characters and emotional impact and throughness and metaphor and woundedness and voice and a thousand other things, getting all wound up. And then a session reminded me to set appropriate goals, to reframe, to tell myself useful fictions, to not externalize my validation, and to practice patience and impatience simultaneously. And to “write fucking more.” I needed all of it.

Right before lunch on Friday, I was on the verge of tears, just because I was so exhausted. But then The Don asked a question about me and what I learned at the conference that launched something in my brain and one of my works in progress became clear to me in a way that would never otherwise had happened. It will be a deeper and tighter book because of that one moment of almost losing it.

And then there’s the making of a symbol.

Since entering the chaos of parenting, I’ve become a very neat person (clean is another story). After being perfectly happy to live in a tornado of books and clothes spread so thickly on my teenage bedroom floor that mice would take up residence every autumn, I now need a peaceful environment — my home must combat the tumult of my life. Even my kitchen cabinets are visions of order. Like is always with like, lined up or stacked in the same positions. Heck, I even arrange the plastic kid snack plates into rainbow color order. As a result, I do not like one-offs in the kitchen. They mess up the organization and the visual calm. I do not like dishes with logos and words. If I receive one as a gift, it goes to Goodwill pretty quickly.

But the first morning I was in my own home since the conference, I cradled in my palms the generous curves of my one-off mug with the conference logo, and cried.

Because I loved the people, because I liked how I was while I was with them, because my brain was a puddle on the floor from all the work it was doing, because we listened to each other’s stories (both the fictional and the personal), because we grieved and we laughed, because we quested together — because of all these things, this one-off logo mug is now a symbol of all the deep and silly things that happened. I will use it every day and it will be full of glorious meaning. 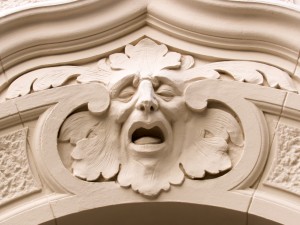 I’m being all grown-up about something. And it stinks.

My husband and I are less than $1,000 away from being at credit card 0 for the first time in several years. We’ve both worked really hard to make this happen and we’re grateful and proud … and not quite there yet. I’m bound and determined to not let it creep up again.

So I can’t do this thing that I want to do more than anything else. For several years, I’ve been part of an online writing community centered around the amazing blog, Writer Unboxed. I’ve commented on blog posts, joined the Facebook community, and become Facebook friends with writers from all over the world. This community has made me a better, more courageous, and more generous writer. They’ve introduced me to novels that I’ve devoured and to writing craft advice that I’ve taken to heart. It’s not exaggerating to say that I love these people.

And they’re throwing a conference.

There are only two days left to sign up, so unless someone steps forward with $1,500 (conference + airfare + lodging + food), saying, “Natalie, I want to invest in your dream of being a novelist. Use this for however you need it,” we can’t afford it.

So many of my favorite people from this community are going to be there, including writing craft instructors who command even bigger bucks than that will be leading sessions. But I’ve lived under the burden of bad, stupid debt for too long. I can’t put myself back there, even for something I want to do so badly. I’m trying to be mature about it, and mostly succeeding, except for this little nubbin in my soul that is consumed with jealousy.

So there’s my whine.

How about you? Is there something you want to do, but you’ve decided to be a grown up about it and are saying no? If so, please share. I’d love to commiserate.

***Edited to add: My husband scolded me and told me it was worth it, so I’m driving not flying, and I’m staying at an airbnb place instead of a hotel, but I’m going to the conference. For my husband to believe in my dream even more than I do … is a priceless gift. Thank you, Michael.