According to this great TED talk by Andrew Stanton (of Toy Story and WALL-E fame), Mr. Rogers carried this quote around in his wallet: “There isn’t anyone you couldn’t learn to love, once you’ve heard they story.”

In the last twenty years, readers have definitely grown to love all kinds of characters who’ve traditionally been villains: vampires, thieves, werewolves, etc. I certainly found this to be true while writing the first David and Saul book: writing Saul, the “villain,” the “failure” of the piece, made me more sympathetic to him. In the first book, anyway, I find him a more interesting character than the upright David. (David gets more interesting in the 2nd book, when he has to compromise his very high principles in order to survive.) 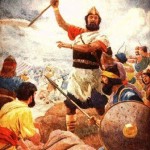 Saul “fought against his enemies in every direction — against Moab, Ammon, Edom, the kings of Zobah, and the Philistines. And wherever he turned, he was victorious. He did great deeds and conquered the Amalekites, saving Israel from all those who had plundered them” (1 Sam. 14:47-48). Yet he’s remembered as a failure. The book of Chronicles (the point of which is to detail the reign of the kings of Israel) contains only the story of his death, nothing about the 42 years of his kingship.

The more I wrote in his point of view, the more compassion I felt for him. His main qualification for being king, other than God choosing him, was that he was tall, head and shoulders taller than everyone else. He seems to have been a good son and a hard-working farmer, but when he and his servant went out looking for some lost donkeys, the servant was the one who thought of seeking out a seer and who had silver to offer Samuel. After Samuel privately anointed Saul and told him the Lord was appointing him leader of all Israel, God had to change Saul’s heart (1 Sam. 10:9) to get him with the program.

Even after this and after all the signs Samuel predicted came true, after prophesying (and being made fun of for prophesying) and having the Spirit of God fill him, he didn’t tell his family what had really happened. The next time he’s anointed, it’s going to be at an official ceremony, but Saul hides in the baggage. And I don’t blame him. Who else gets to start his coronation by hearing how upset God is that the Israelites wanted a king, how God felt it was them rejecting him? Not exactly a rah-rah endorsement.

At first, Saul does the smart thing. “When Saul returned home to Gibeah, a band of men whose hearts God had touched became hi constant companions” (1 Sam. 10:29). There were some haters, but Saul ignored them. When there’s a threat to an Israelite town, he answers in dramatic fashion: cuts up the oxen he’s plowing his father’s field with and sends it around Israel as an incentive to get people to come and fight. They do. There’s a tremendous victory and another public ceremony to crown him king.

Depending on what the “then” in 1 Samuel 12:1 means, it could be that right after Samuel re-re-re-anoints Saul, Samuel gives a long speech detailing precisely what is wrong with the Israelites for the extreme offense of asking for a king. (Or it could take place at some unknown time later in Saul’s reign. Storytelling in the Old Testament is not necessarily linear.) Samuel gets the Lord to send thunder and rain and the people are terrified and cry out, “Pray to the Lord your God for us, or we will die!…For now we have added to our sins by asking for a king.”

No matter when the above scene happens, Saul is most likely standing right there. No matter what kind of character you bring to the situation, that’s a lousy position to be put in.

So I feel for the guy. He was given a job that he didn’t want, that he was unprepared for and that the people were unprepared for. No wonder he so often responded to situations out of fear and insecurity.

At the beginning of this post, I put quotes around “villain,” because I don’t think of Saul as a villain. I write him more as a foil for David because I have pity for him.

So the quote Mr. Rogers carried with him is true from the positive side, but also from the negative side. A couple of years ago, my book club read Mudbound, by Hillary Jordan. It takes place in post-WWII Mississippi, telling the story of a landowning white family and an African-American sharecropping family who each have a son who comes home from the war. There are a half-dozen points of view, half white, half black. It is a deep and gripping story. But there is a villain. The father of the landowner is evil. He isn’t given any redeeming characteristics that I can recall. He makes everyone’s lives miserable and sets into motion horrifying events. As we were discussing the book, one of us noted that the author had originally included some passages in that man’s point of view. My reaction was immediate and visceral: I was glad she took them out. I didn’t want his point of view, because that would make him human. I didn’t want to know his motivations or how his upbringing and experiences brought him to where he was at the time of the story. I just wanted to be free to hate him.

Are there stories you can think of that got you to feel sympathy for the villain? How about villains you’re happy to be free to hate?