I met Amanda Barton in New York City in the mid-1990s. She stood up at a gathering at All Angels Episcopal Church and claimed that nobody there would’ve heard of where she was from in Michigan. Challenge accepted. My husband and I totally knew her hometown, although it was, indeed, super-tiny. Together with two other couples who were, like us, under 30 and married (and therefore felt like exotic zoo animals), we became fast friends. Amanda and I and our husbands even moved back to Michigan within a month of each other in 1998.

So when she said, “I’m looking for someone to help me achieve this dream I’ve had,” I wanted to help her. Her dream was that kids who’d been adopted when they were older might have picture books that reflected their reality — their reality of remembering their previous lives, previous families, of the not-so-smooth parts of adjusting to a new family.

I remembered when she and her husband welcomed a sibling group of three from the foster care system. Now I really wanted to help her.

Out of our discussions came a story about a young boy who feels something monstrous growing inside him (like a cobra, a T Rex, a gas bubble), growing until it comes slithering, roaring, exploding out: “You’re not my real mother!” His mother reassures him: “I’m as real as it gets and I’m not giving up. I’m your mother in truth. Your mother. Forever.” A warm glow spreads inside him (like a flower in June, a cookie out of the oven, a hug). But the feeling doesn’t last. The monster is soon lurking again. One day, the T Rex is only as fierce as a 2-inch tall rubber toy, and it taunts him, “How long is forever, anyway?” The story ends on an “okay for now” moment of love and silliness: “Well, T Rex. Here’s the bad news. Forever for you means that you’ll always have those silly short arms, too short to pick your nose and too short to tickle your son.”

We loved this story. It’s vibrant and silly, frank and loving. So we tried to find agents and publishers who might be interested. None were. But we were not ready to give up on it. We decided to find ourselves an illustrator and publish it ourselves (the story of my life). Because Amanda will ask anything of anyone, she contacted an illustrator who is well-known in our area: Joel Schoon-Tanis.

And here are his first illustrations. 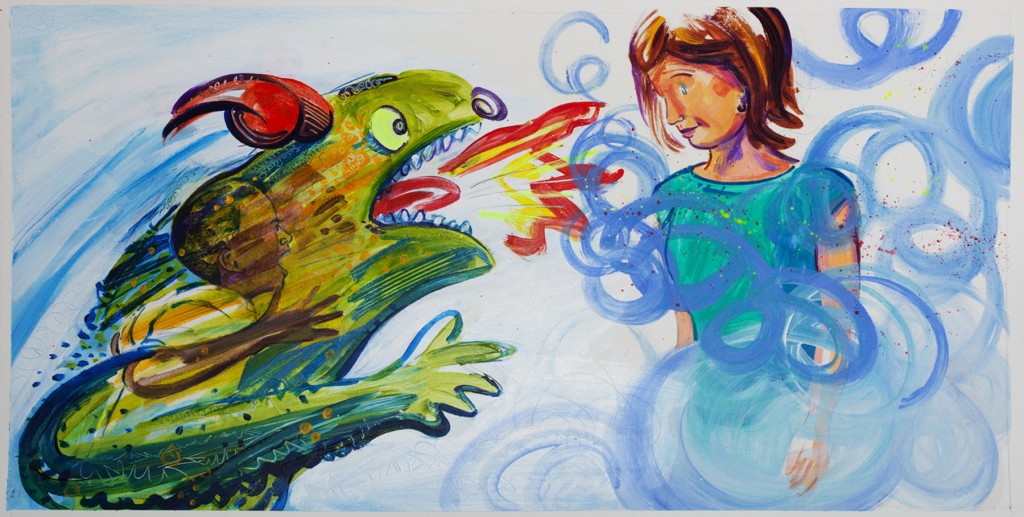 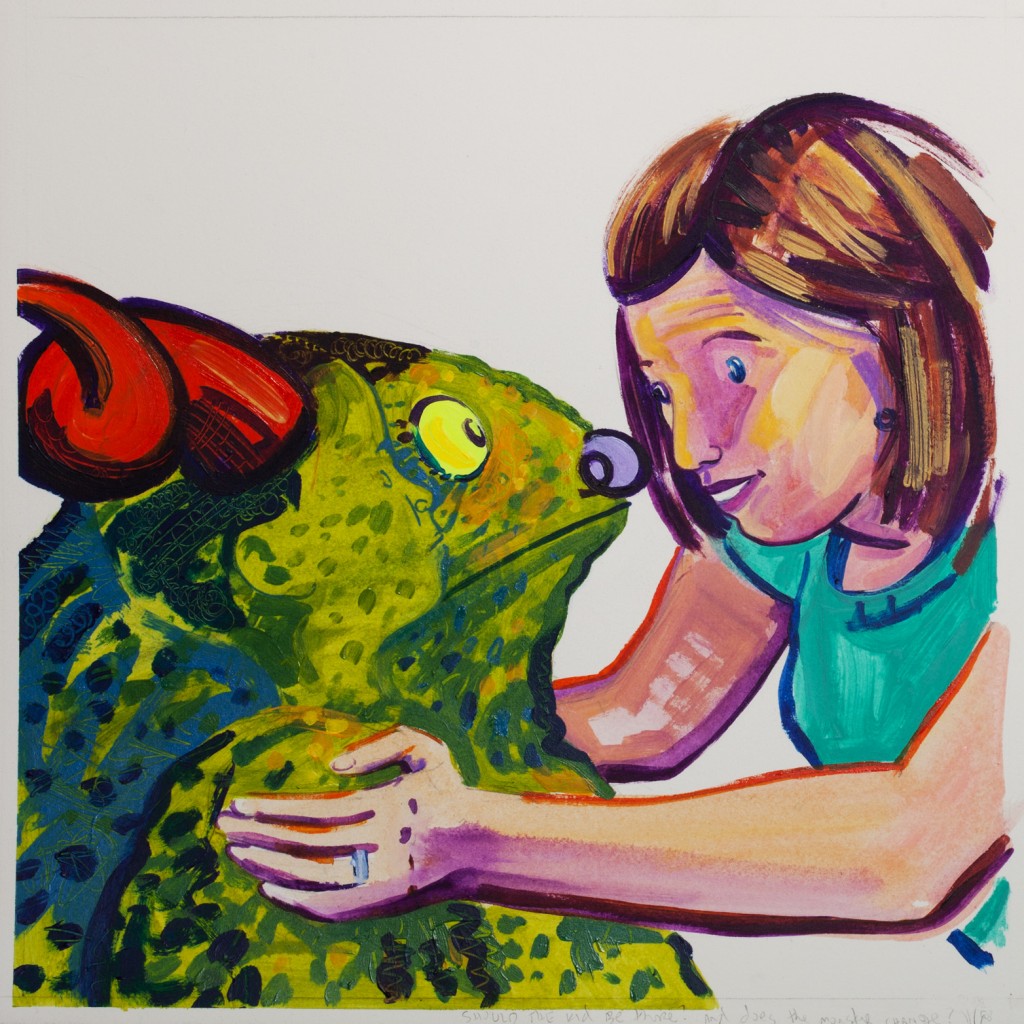 I think Joel totally nailed it. The monster is monstrous but not overly scary. In the top one with the son saying, “You’re not my real mother,” the boy looks angry, but the monster doesn’t. And then in the one with the mother delivering her “I’m as real as it gets” line, the monster looks like he wants to believe it more than the boy does. I can’t wait to see what else Joel comes up with.

Right around Labor Day weekend, we will be opening the Kickstarter campaign. You may become weary of me talking about this in September. But I believe in this project, both because I think it will be beautiful and fun to read, and because there is an underserved group of kids out there, and seeing yourself in a story is a powerful, powerful thing.

I’ll announce here and on Facebook and on Twitter when the Kickstarter goes live, but if you’re concerned that you won’t get the message, let me know via my Contact Me page, and I’ll make sure you are notified.