The first time I taught Sunday School, I was 17. I don’t remember much, other than my felt board and singing the occasional song that got so loud the grown ups could hear us upstairs.

The next time, it was called Children’s Worship, and I was a thirtyish mother of very young children. During that year, I saw a child truly worship — close her eyes, raise her hands, and sing to the Lord with every fiber of her first grade self. It was one of the most beautiful and pure things I’d ever seen. That was also the year I played poker with a few young gentlemen during their choice time, because it was the only way to keep them from wrestling. Neither beautiful nor pure, but fun.

When we moved to the multiracial church when my youngest was 2, I formalized the children’s worship program and lead it every Sunday for eight months. I knew only a few adults in the congregation, but I really got to know the kids. I was the only leader, so I had all the kids, ages 3-2nd grade, and, before I got tough, multiple young helpers. It was exciting and energizing and exhausting.

Then more leaders came on board and there was a schedule. And the next year, even more leaders, enough to split into two classrooms. It felt like such a luxury for me to only lead the preschoolers. There were such competent people involved that I began to daydream about handing over the responsibilities and focusing on dance and drama. I took some seminars, talked to some people, and felt like God was moving me away from children’s worship and towards new opportunities. It was exciting and energizing. And then the church imploded.

In the ensuing storm after discovering that a trusted member of the congregation had embezzled thousands of dollars from the church and the pastor, dozens of people left the church, including 6 of my 7 other children’s worship leaders. I went from thinking I’d be happily taking my shift while someone else was in charge, to being one of two people, in charge again — no separate classrooms, with the kids fully half of the time I was at church.

I gritted my teeth and did it because I believed strongly in the benefits of kids being presented with the great stories of the faith and with church at their developmental level. I like to think I didn’t take it out on the kids, but that was the year Miss Natalie would go into her office for brief timeouts when things got too frustrating. There were so many Sunday mornings I cried, exhausted, telling God that I had nothing to give anymore, so He needed to supply me with some of His energy. He always did. There were many beautiful and fun moments during those hard years when we couldn’t keep a third leader; people would sign up, do it a couple of times, and then leave the church.

I was getting bitter. I didn’t want to be “the kid person.” But after a few years everything shifted during a conversation with my other stalwart leader. We were complaining about our situation and he said something like, “I do it selfishly because of my kids, but you do it because you love it.”

He was right. I did love it, and I loved the kids, and that was why I did it. And just like that, I settled back into the role. I didn’t do it begrudgingly anymore. I didn’t need to beg God to make sure I wasn’t a bitch. I embraced the gifts God had given me. And God brought me leaders enough to split the kids into two classrooms. I wrote a new preschool curriculum with felt board-based storytelling and had a glorious year with my kids — the wild ones I had to rein in and the ones who’d tell me they weren’t going to sing but found themselves singing and doing actions when I sneakily did all their favorite songs. And then the church imploded. This time, I was one of the people who left.

Which means it has been six weeks since I’ve told a Bible story to children or sung silly-yet-spiritual songs with them, and I’m jonesing. So indulge me here. It’s a longish one, but I had so much fun telling this last fall.

As the children arrive, give them one “stone” (a soft ball from the basket that will be waiting by the door). Tell them to hold it carefully and sit in the circle. When everyone’s there, tell them that we’re going to try to defeat our enemy, the filing cabinet. First, does anyone want to try to push it over? Let everyone who wants to, give it a shot ONE AT A TIME.

Now, does anyone want to see if throwing your stone at it will hurt it? Again, ONE AT A TIME.

Segue to the story.

Well, we didn’t defeat the filing cabinet today. But let’s listen to a story about how David, when he was just a kid, a long time before he became king of Israel, defeated someone way, way, way bigger than him with God’s help.

This story takes place during a time of war: a people called the Philistines were at war with Israel. They were on either side of a valley, with a stream in the middle. 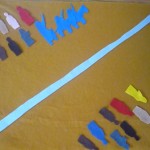 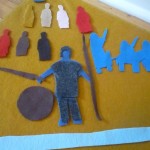 Goliath was huge, and he had a big sword, and a javelin and a fancy helmet and even his shield was bigger than a regular-sized man.

The Israelite soldiers were terrified of the giant Goliath, and none of them went out to fight him.

David’s three older brothers, Eliab, Abinadab and Shammah were in the Israelite army. One day, David’s parents sent him with some food to give to the army.

When David got there, his brothers gave him a boost so he could see Goliath come out and taunt the Israelites. 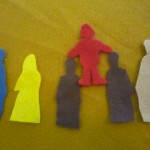 Goliath had been doing that for 40 days, and nobody had even tried to fight him. When David heard that, he was upset that none of the soldiers trusted God enough to help them, so he went up to the king and volunteered.

Well, some people laughed and David’s big brother Eliab got angry at him. David was still just a kid, maybe 15 years old. But David insisted that God would help him and he could do it. So King Saul let him. The king tried to give David his own armor, but it was way, way too big. 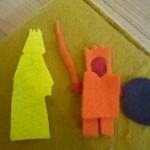 David took off all that stuff and walked forward with only his shepherd’s staff and his sling.

When Goliath saw that Israel was sending a kid to fight him, at first he laughed, but then he got offended and he ran towards David with a roar.

David walked across the stream and picked up five smooth stones. 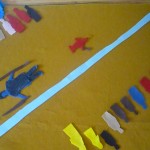 While he ran towards Goliath, he put one stone in his sling, swung it over his head once, and let go.

The stone went right for the unprotected part of Goliath’s forehead, sunk in, and stunned him. He fell face-forward on the ground. 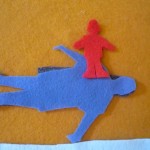 He was still alive, so David took Goliath’s own sword and cut off his head.

David had done what all the grown-ups couldn’t do: he defeated the giant, because he trusted God to help him, so God did.