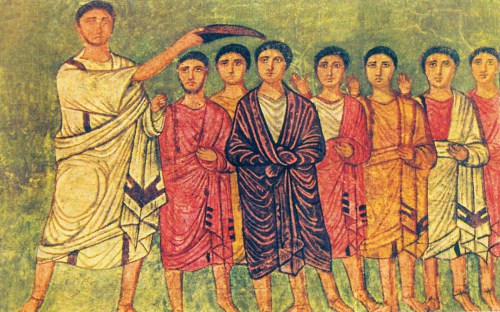 Here’s a thing about belonging: being chosen isn’t enough.

Let’s say you want to be part of a group. You can see them over there being awesome in exactly the way you’d like to be awesome. If only they chose you. Well, let’s say they choose you. Does that solve everything? For some people. Those people will bounce into the group, happy to be there. Others will question themselves: Do I really belong here? Are they just being nice? When will they notice that I’m not worthy to be with them?

Belonging is a feeling, but it is also a decision, a choice you make.

It’s a decision to accept being chosen. Yes, I do belong here. I am worth belonging here. Or even, I’m not on a level of experience with these people, but I will be; this is where I want to be. But especially, they are just people, scared and scarred and sometimes insecure, like me. Because if it’s a good group, a group that lifts up its members by both encouraging and challenging them, that’s one thing I guarantee you’ll find out about each other: you are all striving.

It’s a decision to reject being chosen. No, the cost for belonging here is too high — you’re too snobby, you reject too many people, you take drugs, you take steroids, your sense of humor is too mean. A great deal of personal growth occurs for the “no, I do not belong with you people, I do not want to be the kind of person you have to be to belong in this group,” to happen.

It’s a moment in every Disney show, whether cartoon or live action, when an “outsider” somehow gets in with the “in crowd” and has to be mean in some way to their best friend; then the resulting angst and the pointed words of said best friend teaches them that there are more important things in life than being in the in crowd. (This was the first example that popped into my mind because this is the first summer I’m letting my 12-y-o daughter watch live action Disney shows, so she’s rather bingeing on them.)

This is when your question changes from “do I belong to you/with you?” and “do I measure up?” to “do you belong with me?” and “do you measure up to me?”

There are probably all kinds of groups you’ve been in that you’ve unchosen after awhile, or people you’ve culled from your life because they don’t belong in the kind of life you want to build for yourself and your loved ones. So own that when you feel that being chosen isn’t enough.

*** There might be more wise words, but my five minutes are up in my Five Minute Friday exercise, hosted by Lisa-Jo Baker. ***